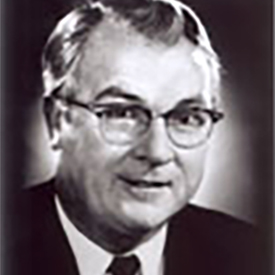 W. Ralston (Ross) Westlake was born August 27, 1907 and was raised on the Hilltop. He was educated in the Columbus Public Schools, graduating from West High School in 1925. He married Helen Siegwald in 1933 and had three children: David M. ‘53 (Irma Jean), Diane ‘58 (Mrs. Barney Poston) and Marilyn ‘61 Jan. (Mrs. Gary Barton Smith).

Ross Westlake’s life was influenced by his father, Milton Westlake, who served ten years as a Columbus City Councilman and eight years as a Franklin County Commissioner. Milton Westlake was also an engraver of ruby glass which was purchased from a Bohemian manufacturer. As a youth, Ralston Westlake also learned the art of glass engraving, but was determined to learn to duplicate the secret process to create ruby glass.

Simply put, ruby glass is clear glass which is treated with chemicals and friend until the thin ruby color is stained into the glass. He experimented in a makeshift lab in his father’s garage for a year and a half until he finally found the combination of chemicals to create the beautiful ruby pieces. He founded the Westlake Ruby Glass Works in 1926 and later, after his marriage, operated his family-run factory behind his home at 3294 W. Broad Street.

The secret process involves many intricate steps. Each piece, painted by hand with the chemical combination, was baked in kilns (which he built himself) at intense 1300 degree heat, cooled for a full day, washed separately in a chemical bath, and then sealed again for fusing. At that point, Westlake, using a stone wheel, could engrave names or designs through the ruby layer into the crystal. The Westlake family then traveled to state and county fairs throughout the United States to sell the glass. Until his death, Ralston Westlake was the only manufacturer of genuine ruby glass in the United States.

Ralston Westlake also had developed a great interest in government from his experiences when his own father was in office. He decided to run for Columbus City Council, was elected and served from 1955-1959. He was President of City Council in 1959. Westlake served as Mayor of Columbus from 1960-1963. His term in office was marked by many accomplishments made possible by his good business practices, personality and integrity. Ross Westlake was known by all to be honest, friendly, respectful to everyone, and very hard-working with a quiet, dignified and unassuming personality.

His term in office was completely scandal-free. Some of the highlights of his term as mayor: The city government operated within its income; services increased and capital improvements were made with no increase in taxes; Freeway program in high gear including the designation of the Olentangy Freeway; Electric rates were lowered twice; Westlake’s administration created one of the first urban renewal programs, Market Mohawk, which sparked the re-birth of downtown Columbus; New Senior Citizens’ Recreation Center; The flood of 1959 was a result of the Dry Run Levee bursting.

After he took office in 1960, Westlake had the Dry Run Levee rebuilt and established a regular monitoring program to guard against future breaks; The German Village restoration program started under his administration and The German Village Commission was established with his help; Three new major parks and a far-sighted new park land purchase program; New fire department complex and fire houses, leading to lower insurance rates. Police department at full strength for the first time in years; police training academy started; Three new recreation centers built or under construction.

Following his death in 1978, the Columbus Citizen Journal editorial stated, “The Westlake characteristic most remembered is that he never carried a grudge, so unlike most elected officials. Whether it was a political opponent or a newspaper editor, Ross Westlake was as polite, courteous and friendly as he was with his family.” Mayor Tom Moody was quoted as saying, “Westlake was one of the kindest, most gentle, thoughtful persons I’ve ever encountered in public office. He was a man of rock-like integrity who loved this city above all else.”