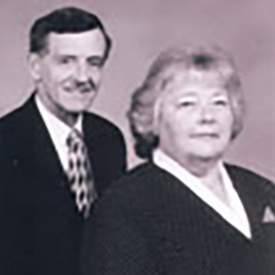 Paul and Sharon taught a combined sixty-two years for the Columbus Public Schools – Paul at East and Briggs High Schools and Sharon at the elementary level.

At Ohio State he was an officer in the Men’s Physical Education Association as well as being a member of the Ohio State basketball team his freshman and sophomore years. During his teaching career, he taught biology, physical education, health and driver education. He also was in charge of boys’ attendance, a home-school community agent, and a part of the safety and security program for the Columbus Public Schools.

Paul has 36 years of experience coaching basketball and 25 years coaching baseball. His first coaching position was at the West Side Boys Club beginning in 1958. His Babe Ruth teams won several league championships and won the Ohio Babe Ruth State Championship in 1963 and represented Ohio in the Regional Games in Eau Claire, Wisconsin. He also coached at the American Legion level.

Highlights of his coaching career include being a part of three state basketball championships at East in 1963, 1968 and 1969; and taking his Briggs basketball team to the Final Four in 1991. As head baseball coach at East, Paul won city baseball championships in 1967 and 1968 and led his team to the State Championship in 1969. At Briggs his 1985 team won the City League Championship. Paul is one of a select group of coaches who has taken teams in two different sports to the state of Ohio Final Four and has also coached in both the basketball and baseball state all-star games.

Paul has been a member of the Hilltop Kiwanis Club for 26 years, and served as president in 1994-95. One of the projects that he chaired for Kiwanis, and one in which he takes great pride, was the creation of the “Hilltop U.S.A.” afghan. The afghan was designed by Paul and Sharon, and over 1000 afghans were sold by the club to proud Hilltoppers – past and present. He was named Kiwanian of the Year in 1996. Paul is a two-time past president of the West High Alumni Association as well as past president of the District 10 Basketball Coaches Association. He is an active member of Crossroads United Methodist Church.

Sharon was a member of the West High School January Class of 1958. As a student at West, she was active in many organizations and participated in the girls’ athletic programs. She served as president of the Girls’ Athletic Association as well as president of her senior class.

Sharon was the first female to be elected a class president at West and part of the first class to have all-female class officers. She was a member of the National Honor Society and valedictorian of her class.

A 1962 graduate of The Ohio State University with a Bachelor of Science in Education, Sharon served as secretary of the Women’s Self Government Association while at OSU, and was president of her sorority, Alpha Chi Omega, her senior year. Sharon was elected to Mirrors and Chimes, sophomore and junior women’s honoraries. She received a Master of Arts in Economic Education from Ohio University in 1982.

Sharon spent 26 years in the classroom at the following schools: Binns, Wayne and Lindbergh. She also served two years as an Instructional Coordinator and two years as a pupil and community assistant. She has received the following awards and recognitions: Valley Forge Freedom Foundation Award, Sohio Excellence in Teaching Award, Martha Holden Jennings Scholar, and the CPS “Good Apple” Award.

Sharon received the Golden Bruin Award for volunteer service to Briggs High School, and in 1995 was presented with the “Women of Character” Award by the Greater Hilltop Community Development Corporation and the Westside Messenger.

Paul and Sharon, high school sweethearts, celebrated their 44th wedding anniversary in August. They have always resided on the Hilltop. Paul and Sharon are equally thankful for the education provided them by West High School as a basis for attaining their career goals.

Update: We regret to report that Sharon Dent Pennell died September 3, 2017 after a few years of renal failure and other health complications. Just three weeks before she died, Sharon and Paul renewed their wedding vows in recognition of their 55th wedding anniversary. Sharon was active with the Alumni Association in several capacities from the beginning of the Association up until the most recent days she spent proofing the 2017 summer Alumni Occident Newsletter before it was printed and sending Thank You notes to those who donated to the Scholarship Foundation. Her contributions to the Alumni Association have been invaluable and will be greatly missed.