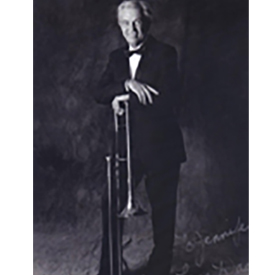 The soft-spoken gentleman steps forward, baton in hand. He is easily recognized by his full head of wispy white hair. The players fall silent. A few soft comments are made to the band, usually followed by chuckles and asides from the performers. The baton goes up and a lifetime of music is about to be replayed. Enter “Mr. Dale” or “Tommy” a man who has influenced and touched the lives of many musicians and other individuals over the years.

But who are these musicians who were so willing to follow with respect where their conductor lead? They include the students who were taught by him from elementary school through high school; they include players in military dance bands and orchestras led by him; they include fellow musicians who respond to his skills and input as a performer; and they include the members of the Aladdin Shrine Band who followed his directives and his commitment to give back to the community through their music and financial contributions.

Thomas William Dale was born December 30, 1928. At six years of age, he developed Streptococcus and became bed-fast for almost a year with an enlarged heart. When his health improved, he was able to leave his bed but had to learn how to walk again. In time, he was able to return to school and normal activities. When he was in 5th grade, the band director of his hometown Gallipolis High School needed trombone players, so he recruited Tom and three of his friends to start taking lessons. At first, his arms were not long enough for some of the slide positions, so he used his feet. Tom relocated to Columbus, Ohio with his family. He and his brother, Jack, joined the Columbus West High School Band. During this time, Tom and some of his fellow students, helped the interim female director with band formations and half time shows. By the time Tom was age fifteen, he was playing professionally with Paul Hand’s band from Newark, Ohio. Since most males were away serving their country during World War II, Tom earned his union card and his professional career was started. With Hand’s band, he played all over Ohio. One of the older drummers and a trumpet player drove and looked after the “kids” in the band. Tom often wondered how the band came up with the rationed gas stamps in order to get them to their jobs.

After graduating from West High School in 1945,Tom attended The Ohio State University and graduated cum laude in 1949 with a Bachelor of Science in Education, majoring in instrumental music with a vocal minor. He also earned his Master of Arts from OSU in August of 1955. During his university years, he was in the OSU Marching Band, Men’s Glee Club, and the OSU Orchestra and Concert Band. His skills for teaching music and working with students were fine-tuned in his course work and then paired with his love of music. This foundation set his career direction to a lifetime of giving and teaching. Immediately after graduation from OSU, he started teaching music for the Columbus City Schools at Starling Junior High and then at West Junior High. By 1951, he was assigned to West High School and served as music teacher for the high school, the junior high, and the elementary school that fed into West High.

His teaching was interrupted when his unit was activated due to the Korean Conflict at the start of 1952. He entered active duty with the National Guard for the next eleven months. He was a Master Sergeant in charge of the dance band and concert band at Camp Polk, Louisiana. Some of his assignments included playing in service clubs, as well as leading the parade at the Mardi Gras.

Upon his return from military obligations in January 1953, he took a music teaching position at Indianola Junior High. He went on to teach at Columbus North High School from 1961 to 1979. At North, he directed football half time shows in addition to teaching dance band, music theory, orchestra, and marching band.

Former students from his public teaching years frequently said hello to “Mr. Dale” when they saw him in the community and reminisced with him about the times he enriched their lives and made them feel special.

Even while teaching every day, he performed in the evenings at various places in the Columbus area with his own group, The Tommy Dale Dance Band. He also taught students privately so they could improve their skills. After retirement from Columbus Schools, he became the secretary to Local 103 AFM Musicians’ Union. He started out as a part-time secretary and then became the union president during the 1980’s, remaining in that position until 1995 when he retired from the union.

Throughout his professional music career, Tommy Dale played for traveling Broadway shows, the Ohio State Fair, and many dances. He also participated in the Chuck Selby, Al Waslohn, and the Jerry Kaye bands. In addition, he performed in shows that spotlighted celebrities at the former Scott’s Inn in Columbus. Many of these musicians, as did Tommy, went on to become part of the Columbus Jazz Arts Group. He played lead trombone for this group for 25 years. This group is now known as the Columbus Jazz Orchestra.

Tom started volunteering as the director for the Aladdin Shrine Band in 1968 and continued to direct the band for 40 years. During his tenure in the Shrine, their unit had one of the highest attendance records at rehearsals and performances. Tom also directed the Shrine Dance Band and the trombone group known as “The Bones”. He was chosen to be a member of the Royal Order of Jesters-Court 8 and was also selected as a member of the Ambassador’s Club. Only a small number of Shriners are chosen for this recognition, which honored Tom for his service and volunteer work throughout the years. Tom organized the schedules of band members to volunteer for the Salvation Army at Christmas. He annually volunteered at The Muirfield Golf Tournament in order to raise money for the Shriner’s charitable efforts. In addition, Tom was a member of the Shrine Band, prior to directing, and performed at many events such as parades, the circus, concerts, and competing at national conventions. Tom also volunteered his time at Covenant Presbyterian Church in Upper Arlington, where he had an active role with the choir and other musical performances.

In addition to his professional life, Tom had a loving family. He married Judi Tritsch in 1951 and they had four children; Tom Jr., Matt, Lisa, and Jenny. His two sons worked in construction in the state of Colorado and, unfortunately, both died young due to cancer. His youngest daughter, Jenny, is following her ambitions in New Mexico. His eldest daughter, Lisa, is a musician and directs a contemporary Christian band, as well as being a teacher in Columbus. Tom and Judi were together until Judi’s death in 1992. Tom remarried in 1995 to Pat Bujold. In health, Pat was Tom’s continual companion and partner and, in sickness, she was his support and caregiver. Tommy passed away on December 10, 2014.

Tommy Dale influenced people’s lives for over seventy years. He set an example of giving back to the community, sharing his love of music, and the continued teaching of performance skills. Whether it was a senior citizen or a ten-year old elementary student, he always inspired each individual to do their best by accepting where they were and reinforcing their efforts. Everyone was valued. No one forgot meeting Tommy Dale with his infectious laugh and wonderful, caring manner that connected with each person he met.