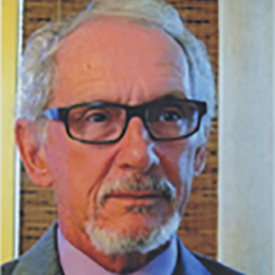 In his early years, Charles “Charlie” Castle lived in the area of Eureka Avenue and Valleyview Drive and he attended Highland Avenue Elementary School. When he was thirteen, his family moved to 44 South Ogden. His junior high school years were at West High School. As it turned out, Charlie’s ninth grade class was the last class to complete their junior high years at West, due to the opening of Westmoor Junior High School the following year.

After graduating, Charlie worked for the county and planned on attending Capital University. However, circumstances changed, and he began his 28-year career at General Motors. Charlie also married. While working at GM, he also served in the National Guard from 1966-1972. In addition, Charlie initiated and coached both basketball and softball teams at Highland Baptist Church (Grove City). The young adult players were required to attend church services to be eligible to play. Also, Bible studies were held in Charlie’s home. Out of all the young players that were members of the teams, four became pastors.

He retired from General Motors in 1992 at the age of 47 and began his career in golf. However, his actual exposure to the business of golf was at age nine, when he and his brother, Bill, began to caddie at Raymond Memorial Golf Course. They caddied for five years. Charlie’s first “professional job” was serving as the Assistant Golf Director at Grovebrook Golf

Club in Grove City. The following year he was promoted to Golf Director. During his years at Grovebrook, Charlie was very supportive of the Grove City Middle and High School golf programs. Joe Kenneth, a teacher from the middle school, approached him about helping him start a middle school golf team to support the struggling high school program. Thanks to Charlie’s help, great improvement in the high school program occurred. Through the 15 years at Grovebrook, Charlie never charged the schools to practice or play the game of golf. Aside from golf, he officiated for the Grove City Kids Basketball Association for 15 years.

In 2005, Charlie became the Director of Golf at the Phoenix Golf Links. Shortly after this, the Southwestern City Schools levy failed forcing the closing of sports and other extra-curricular programs. With the help from Todd Hurley, father of a Grove City High School golf team member, Charlie started a league in which the teams could continue to play. The league was called CFGW Links League that stood for Central Crossing, Franklin Heights, Grove City, and Westland High Schools. This included all four high schools in the school district. In addition to this program, Charlie helped organize a fundraiser golf outing for The Refuge, which is a Christian-based, in-house, alcohol and drug treatment / rehabilitation center.

Charlie officially retired from the golf business in December 2014. He has enjoyed his free time by playing golf and pickleball, and spending time with his family.

Charlie coached Little League Baseball for his three children: Holly, Chas (deceased), and Jake; and two stepchildren: Rick and Mike. This maintained a very busy, but enjoyable schedule for Charlie and his wife, Susan. They now have eleven grandchildren and two great-grandchildren to keep them quite busy.