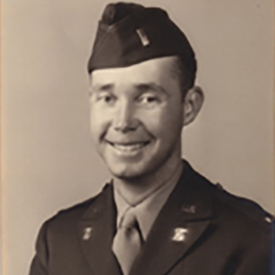 Roy Riggs was born in Columbus, Ohio in 1913 and graduated from West High School in the Class of 1931. He grew up in the family home on South Hague Avenue and was one of five children of Clyde and Hattie Riggs. While he went on to achieve high success in the academic world and in the military, his memories of West High were among his fondest. He was President of the Owls Club and was especially proud of his baseball career at West where he was leadoff batter and played outfield and first base. Known to his teammates as “Scappy. Roy kept a scrapbook of press clippings of his baseball performance, including an account of his driving in two runs in the bottom of the ninth in a come-from-behind win against an archrival.

Following his graduation from West, Roy worked for several years to earn money for college and, eventually, entered The Ohio State University where he received a Bachelor of Arts in English. He turned down an opportunity to play baseball for Ohio State at the urging of his academic advisor who thought he held great promise to become an “academic” and should concentrate exclusively on his studies. His academic efforts were rewarded when he was elected to Phi Beta Kappa and graduated with distinction. He was to return to Ohio State following WWII, earning an M.A. and Ph.D. in Literature, thus launching him into what became a highly successful academic career.

Drafted into the Army as a Private in 1941 when the United States was gearing up for war, Roy received his commission as a Second Lieutenant in 1942. In 1944, he joined the Third Army as a Company Commander in logistics under General Patton. He served with General Patton in campaigns in Northern France, Central Europe, and the Rhineland. His wartime decorations included: the Bronze Star Medal, two Meritorious Service Unit Awards, and the American Campaign Medal. While in the Army he met and married his favorite Army nurse, Lt. Edith Riggins. She treated him “a little roughly,” he would say, when he required hospitalization at Camp Lee, Virginia. Roy and Edith were separated during the war – she was deployed in Italy and Northern Africa and he in France and Germany – and were reunited in Paris in 1945 following the liberation of France.

In his discharge papers from the Army, Roy’s civilian occupation was listed as “freelance writer.” He loved to write and, in fact, carried a portable Smith-Corona typewriter on his back throughout his European tour of duty. His journal and letters recording his observations on the war and military affairs total hundreds of pages and constitute a ground-level account of a soldier with a keen insight and a literary flair. His papers are being collated with an eye toward eventual publication. Roy held the rank of Captain when he was discharged from active duty in 1946. He remained in the U.S. Army Reserves following active duty. He held the rank of full Colonel at the time of his retirement from the Reserves at age 60.

After the war, Roy returned to Ohio State and taught English classes while working toward his doctorate. He was a no-nonsense teacher and did not hesitate to give low grades where they were deserved. One day he received a call from the legendary Woody Hayes who asked him to raise the grade of one of his star football players. In the first of many tests of his integrity and moral courage in the course of his career, Roy said, “Coach, I don’t tell you how to run your football team. Don’t tell me how to teach my English class.” He didn’t change the grade. After completing his doctorate, Roy accepted an initial teaching position at North Dakota State University where he taught for six years. He then went to Wayne State College in Nebraska where he served as Chairman of the Division of Languages. He founded the Nebraska Conference of American Association of University Professors.

In 1963, Roy finally found his ultimate academic mission when he was invited to join the faculty of Asheville-Biltmore College. The North Carolina Board of Higher Education, with strong support from Governor Terry Sanford and the state legislature, had decided to build a first-class liberal arts college in Asheville – the public equivalent of a Swarthmore or Reed – with high academic standards, small classes, and a rich faculty-student ratio. Roy found this challenge compelling, and he was exhilarated by it. His effective leadership and administrative skills, as well as his professionalism were quickly noticed. Almost immediately upon arriving on campus he was named head of the English Department. Within a year, he had become Chairman of the Department of Literature and Language, and a year after that, the Chairman of the Division of Humanities. He was instrumental in developing an innovative Humanities curriculum that is still in place today and has been emulated by public and private colleges throughout the country.

As Asheville-Biltmore’s reputation grew, so did its academic stature in North Carolina. In 1969, in recognition of its standing in the academic community, Asheville-Biltmore College became the University of North Carolina-Asheville, one of six official campuses of the UNC system. Roy was named UNC-A’s first Vice Chancellor for Academic Affairs, a position he held until his retirement at age 65. Following his retirement in 1978, the University established the Roy and Edith Scholarship Fund in honor of his many contributions to the institution. The Board of Trustees subsequently bestowed on him the honorary title of Professor Emeritus of Literature and Language and Vice Chancellor of Academic Affairs.

For his entire 15 years at the University, Roy was steadfast and uncompromising in his devotion to making UNC-A a top-tier, nationally recognized, public liberal arts college. Had he lived long enough, he would have been very gratified to see UNC-A come of age. He would have been especially proud to see that in its 2014 college rankings, US News and World Report ranked UNC-A as the seventh best public liberal arts college in the United States. The vivid dream Roy had energetically embraced and tirelessly pursued had become a reality. He would have been quietly pleased. Quietly and humbly pleased.

Roy died in 2001 at the age of 88 following an extended fight with leukemia. His wife, Edith, died the previous year. He left behind three children Greg, Mark, and Deena; daughters-in-law, Kaye Riggs and June Gaze-Riggs; and two grandchildren, Callie and Kristen. His brother, Dr. Harry Riggs ‘38, and sister, Doris Riggs Fahrenbach ‘35, also survives him.