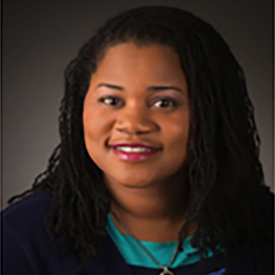 Cindy Jordan Reese was born in 1969 in Columbus, Ohio. Her parents are Wade and Fairy Jordan. She has two sisters, Cathy Jordan-Diggs, Class of 1982, and Victoria Jordan Landrum, Class of 1986. She has one brother, Wade Jordan III. Cindy graduated from West High School in 1988 with honors. She was a member of the National Honor Society and received numerous academic awards. Her picture is displayed in the Academic Hall of Fame. In addition, she played basketball and sang in the Gospel Choir.

She enlisted in the Air Force in September 1988 as an Administrative Specialist and headed to Lackland Air Force Base (AFB), Texas for basic training. Her training continued at Keesler Air Force Base, Mississippi where she attended the Administrative Specialist course. Her first duty station was Wright-Patterson AFB, Ohio. She achieved Distinguished Graduate of the Airman Leadership School in 1992. She started her post-secondary education, part-time, at Sinclair Community College. Cindy earned an Associate of Science Degree in Electronic Engineering Technology with honors in 1993. Later that year, she was assigned to the Joint Information Technology group with duty in Fairfax, Virginia as the Non-Commissioned Officer in charge of Information Management Reports and Records.

In 1997, Cindy was assigned as the Non-Commissioned Officer of Administrative Services for the Deputy Director for Military Support at the Pentagon. She continued her education and graduated with honors in 2003, earning a Bachelor’s of Science Degree in Computer Engineering. She, subsequently, was selected to attend Officer Training School at Maxwell AFB, Alabama for her commissioning to become a Commissioned Officer. Upon graduation, 2nd Lieutenant Reese attended Expeditionary Communications Officer Training at Keesler AFB, Mississippi. After graduating with honors, she attended the Air and Space Basic Course at Maxwell AFB where she led her flight to receive the designation of Top Flight.

2nd Lieutenant Reese was assigned as the Assistant Officer in Charge of the Network Control Center in the 89th Communications Squadron at Andrews Air Force Base, Maryland. After her promotion to 1st Lieutenant in May 2006, she served as the Chief of Executive Communications Support and as Budget Section Chief. She was handpicked for the National Reconnaissance Office (NRO) Advance Academic Degree Program and promoted to Captain in May 2008. She, additionally, earned a Master’s of Science Degree in Electrical Engineering and Software Engineering in March 2009 from the Air Force Institute of Technology. After graduation, she headed back to the NRO and was assigned as the Chief of Enterprise Integration and Readiness for the Office of Mission Applications. In this position, she led a 116-person team providing end-to-end life cycle Systems Engineering support for a multimillion-dollar portfolio.

In March 2011, she became the Acting Chief of the Readiness and Test Division in the Ground Closure Group. Cindy orchestrated over one hundred Ground Systems Engineering readiness activities to enable approximately $1Billion in mission processing and Geospatial Intelligence Command and Control activities for various satellites.

In September 2011, she became the Acting Chief of the Architecture Division. She captured and documented the Ground Architecture for over 75 programs and projects in the Ground Enterprise Directorate. She was selected as the Air Force Space Command Company Grade Officer of the Year for the Division.

Cindy retired from active duty military service in September 2012, serving close to 24 years for her country. She is currently employed with Deloitte Consulting LLP providing Systems Engineering and Technical Support for her client’s mission of Counterterrorism. Cindy is also the founder and CEO of a start-up Nonprofit Organization, R.O.S.E.S., Inc. where the mission is its namesake: Restoring, Opportunity, Strength, Empowerment, and Self-Awareness to women and their families in the area of housing and workforce development. The purpose of R.O.S.E.S., Inc. is to improve self-sufficiency and self-reliance to those in at-risk situations by providing transitional housing resources and continuum of care through life-skills training. More information can be found at www.RosesCoalition.org.

Cindy is also the proud mother of two daughters, Amasyah and Ambria. They currently reside in the Washington, D.C. metropolitan area.