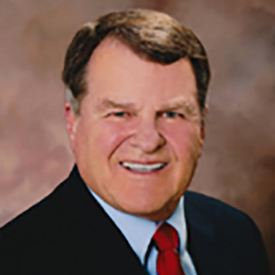 Dennis McDonald graduated in the June class of 1957. As a student at West, Dennis was secretary of Hi-Y, treasurer of Triangle Club, played quarterback on the football team, and received All-City honors in football, basketball, and baseball. He was a member of the Youth Traffic Safety Counsel of Central Ohio, a finalist in the 1956 Industrial Arts Awards competition in Dearborn, Michigan, a1956 participant in the apprentice engineering and drafting training program at Westinghouse Electric Corporation, and the school representative to the Student World Affairs Institute sponsored by the Rotary Club of Columbus. In addition to these recognitions, Dennis earned a superior rating in chemistry from The Ohio Junior Academy of Science and received numerous awards in architectural drafting from the State of Ohio, including being named the 1957 individual sweepstakes winner in mechanical drawing at the Ohio State Fair.

After high school graduation and while attending The Ohio State University, Dennis established the Westgate Hawks Youth Football Program for boys and cheerleading for girls. He was head coach for 20 years for the 13-year-old traveling team, compiling a record of 192 wins, 12 losses, 3 ties, and 20 league championships. In 1958 Dennis organized the Westgate Hawks Pony League (renamed the Karl J. Fulton Pony League in 1967) for boys 12 and under. He served as co-commissioner until 1977. The purpose of the league was designed to introduce the game of football to youth by teaching them the basic fundamentals of the sport. In addition, every player was given the opportunity to participate in every game on a competitive basis. Throughout the program, the importance of pursuing a good education was adamant. The Pony League Program has influenced the lives of thousands of boys and girls in and around the Hilltop area. This program is now in its 57th year serving the youth of the west side. Many of the players have gone on to play high school and college football. Dennis received an Award of Merit from The Sideliners organization in 1970 for his work with the youth in the central Ohio area.

Dennis was the first head coach of the Columbus Metro Semi-Professional football team in 1978. That team’s roster included, among others, former OSU players Cornelius Green, Bob Hyatt, and Woody Roach along with Bob Kramer from Indiana University.

In October 2007, the Westgate Hawks Football Club organized a reunion to honor Dennis. Many of his former football players attended. He was presented a letter of commendation for his many years of dedicated service to area youth from Deborah Pryce, member of Congress (Ohio 15th District, House of Representatives). Dun & Bradstreet employed Dennis for 27 years in Columbus, Ohio and Tampa, Florida, laterally as Division Operations Manager and National Utilities Analyst. He was a Presidential Citation Award Winner in 1980, 1981, and 1982.

Since his retirement from Dun & Bradstreet in 1993, Dennis has been active in Senior Olympics basketball competition organizing, qualifying, and successfully competing at the National Senior Games held at various locations around the United States. Over the years, Dennis has been awarded numerous gold, silver, and bronze medals in individual and team senior basketball related events, both on a regional and state level in Florida. He is a member of the board of the Pinellas County Senior Games and is Vice President of his Glen Eagles Home Owners Association. Dennis and Charlene are members of the New Port Richey Recreation and Aquatic Center. They enjoy biking, swimming, visiting the local Gulf Coast beaches, and attending as many home games of the Tampa Bay Rays professional baseball team as possible. Dennis attends Palm Harbor United Methodist Church.

Dennis is married to Charlene Smith McDonald, West High School graduate from the June class of 1958. They are the parents of Brook and Darin (deceased) McDonald and grandparents of Taylor, Sage, and Seth McDonald. Brook was part of the Westgate Hawks program in 1974 and was starting quarterback for three years at Otterbein College in Westerville, Ohio. Dennis’ grandson, Seth, an All-State linebacker in Illinois, is a member of the Eastern Illinois University football team.

Although moving to Florida in 1983, Dennis and Charlene return to Columbus at least once a year to attend an Ohio State football game and to visit friends and relatives.