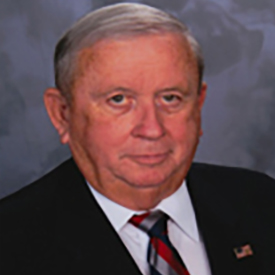 Eugene “Gene” Russell was born in Columbus, Ohio in 1939 and lived on the Hilltop until February 1962. He attended Highland Avenue Elementary School, West Junior High School, and graduated from West High School in the June Class of 1957. While at West, he participated on the Track and Cross-Country teams.

Following graduation from West High School, Gene attended The Ohio State University, graduating with a Bachelor of Science degree in Business. After graduation, he was commissioned as a 2nd Lieutenant in the Army Reserve and later commissioned into the Regular Army. Gene remained in the Army until he retired as a Colonel, U.S. Army Special Forces/Infantry.

During his time in the Army, Gene served multiple tours in the United States. He served two tours in Vietnam, one with Special Forces and one with the 1st Cavalry Division (Airmobile). Other tours included an exchange assignment with the British Army; a tour in Panama where he commanded the 3rd Battalion, 7th Special Forces; and tours on the Army Staff and the Joint Chiefs of Staff in the Pentagon. In addition, he was the Professor of Military Science at the University of Wisconsin-Oshkosh.

While in service, he earned an MBA from the University of Wisconsin-Oshkosh and graduated from The National War College in Washington, D.C.

Following retirement, he worked for BETAC, Inc. and was a Pentagon Manager in the fields of Special Operations, Counter-Drug, and Counter-Terrorism. Gene then formed his own independent consultant firm, Grey Eagle Service, L.L.C. His consulting firm continued doing the work that he did at BETAC and added the following: Red Teaming, War Gaming, and Technology Insertions, Training Assistance, Improvised Explosive Devices (IED) Detection Program Management, Unmanned Aerial Vehicle Technology Demonstrations, and Risk Assessment/Loss Control for Insurance Underwriters of Recreational Properties.

For the past five years, he has been the Executive Director of The National War College Alumni Association where he is responsible for the Association’s activities, forums, and operation of the Alumni Store for the students, faculty, and graduates.

Since 2002, Gene has been instrumental in setting-up activities to support the Wounded Warriors and their families at Walter Reed, Fort Belvoir, and other locations across the United States. Major events include: running the Annual Katz’s Deli Warrior Lunch at Walter Reed (just completed the 9th annual event); Seven Range Days for the Warriors and their families; and goose hunting and fishing trips. He is now on the Board of Directors for the Air Warrior Courage Foundation, supporting Warriors across the globe. Much time is spent on smaller programs such as Thanksgiving and Christmas meals for the families of the Warriors remaining in hospitals, as well as supporting them with special needs, such as therapeutic horseback riding and various other individualized needs.

Gene leads his church in Warrior Support that includes sending packages to those overseas. He is also part of a church organization in Northern Virginia that helps Warriors and their families. In addition, they help interpreters from Afghanistan and Iraq resettle in our country.

Lastly, Gene has been involved with a Discipleship Outreach Program with the Alexandria, Virginia Detention Center. Their mission is to bring back men to Christ and away from crime.

Gene is blessed to be married to Sharon Anne Gygli Russell. They met in 1967 and were married a year later. They have two wonderful girls, Gretchen Russell, and Peggy Howard, and two grandchildren, Ginger and Lucy Howard.

Gene believes that the life skills he learned while growing-up on the Hilltop, has provided him with a strong foundation throughout his life. For this, he feels fortunate.