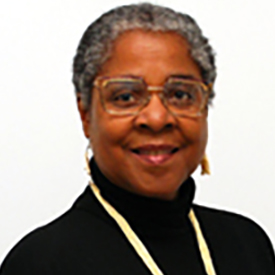 Her parents are Anna Jennings Beatty ’36, who now lives with Annette, and Robert Beatty ’39, who is deceased. Her three children are all West alumni – Darrin ’83, Alan ’84, and Kenya ’88. She also has one sister who is a West alum. This past year both Annette and Alan marched with the Alumni Band at Homecoming!

In her mid-20s, as a single parent with three small children, she pursued an opportunity to further her education through a financial aid program. In 1974, at the age of 30, she was awarded a Bachelor’s Degree from The Ohio State University with a major of English and Communication. With a teaching certificate in hand, she first taught at Roosevelt Jr. High and then Clinton Jr. High. While teaching, she decided to use the program the Columbus Schools’ sponsored for teachers to pursue a masters degree with the Columbus Schools paying for it. In 1979 she was awarded a master’s degree in Black Studies and Community Development.

Two weeks after taking a teaching job at Briggs High School, she decided to change directions and move to the non-profit world. She accepted a job as the Director of Adult Vocational Training with the Columbus Urban League. The Urban League is a community-based, non-profit, advocacy organization. In her position there she worked with programs to open Computer Assisted Learning Centers. She worked with schools to send their students who needed additional help to ‘catch up’ with their studies to these Centers.

• While at the Urban League, Annette developed a program called Operation Bright Side. The program worked with youth in helping with summer jobs while also including educational programs. Annette wanted to make sure the students could maintain the skills learned throughout the school year by maintaining and even improving their educational skills during the summer. The model she implemented is still in use today.

• Also when working at the Urban League, Annette won an English Award for non-profit organizations. The monetary award associated with the award was $2000. After a lot of praying, Annette took this opportunity, and a leap of faith, to quit her job and go back to school in pursuit a Ph.D. She was able to get a scholarship from The Ohio State University, and she was hired as a graduate assistant to earn pay as she went back to school. The $2000 was used to pay for her books. As of 1996 Annette holds a doctorate in Social Work Administration. Rather than do what many with a doctorate degree do – work in research or teach, she wanted to work in her community and make a difference.

• In 1996 Annette organized the Hilltop Neighborhood Action Group, a block-watch group. Her involvement with that included writing grants to obtain funding from the United Way and the Columbus Foundation. Her primary efforts involved developing programs for neighborhood revitalization. The neighborhood she was working with was the area east of West High School – Hague, Harris Warren, and Ogden Avenues, between Broad Street to

Sullivant Ave. Through her efforts, their
program was recognized as a Regional winner in the State Farm Insurance ‘Light the Way Program.’ An insurance company was involved as it helps communities to have their areas ‘lighted’ to reduce crime and violence. Through the program, porch lights were installed, free of charge, on the homes of elderly and low-income families. Winning as a Regional winner, the Hilltop Neighborhood Action group received a $2500 cash award. The winnings were used for various programs in the neighborhood.

• Another program went by the acronym RAAS (Raised Addresses Axxx Sxxx). Annette learned the Columbus Police Department had problems locating house addresses when looking for a resident from the alley. They would have to drive past the front of the house, then count the number of houses to the end of the block, then go back to the alley to count the houses to find the house they were looking for. The RAAS program involved installing large, green house number signs in the back of homes. Annette was successful in getting these house numbers installed in the Hilltop neighborhood.

• Annette was able to involve the United Way ‘Make a Difference Day’ program to partner with several businesses to make improvements on the Hilltop. In 2000 Annette received one of the five Jefferson Awards given to community volunteers. The Jefferson Award recognizes individuals who do extraordinary things in their communities without expecting reward. That award provided a $500 cash award.

• In 2001 Annette was recognized by the Greater Hilltop Community Development Corporation as one of the Women of Character Award winners.

• Annette was featured in a Westside Messenger article titled “Westside Wonders.” This was a series of articles showcasing Westside residents who have overcome obstacles in their lives to achieve success.

• She wrote grants to get the new J. Ashburn Center facility funding.

• One of her very visible contributions is, in her words, “Bringing dead people to life!” As a living history presenter, she gives an up-close and personal view of the lives of Harriet Tubman and Sojourner Truth. I “ed-u-tain” others about Rosa Parks and African American Women During the Civil War. These programs are offered through my company DeARK Enterprises, the Speakers Bureau of the Ohio Humanities Council, The Ohio Alliance of Arts in Education, and We’ve Know Rivers, an African American living history theater arts company.