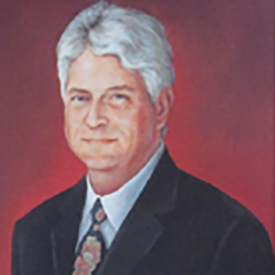 Richard Williamson graduated from West High School in 1961. While at West, he was the sports editor of the yearbook, president of Hi-Y, participated on the cross country and baseball teams, a member of the senior choir and glee club, a member of student council, and attended Boys’ State.

He joined the faculty of the Marshall Wythe School of Law at the College of William and Mary in 1970. He became a full professor in 1975 and a Chancellor Professor in 1986. He also served as the College’s Coordinator of Legal Affairs for ten years. Upon his retirement in April of 2007, the Board of Visitors recognized his extraordinary contributions during his 37 years of service to the Law School and the College, and conferred upon him the title of Chancellor Professor of Law, Emeritus

During his time on the faculty, he served as Dean of Admissions, Vice Dean, and Acting Dean. Along with Deans William Spong and Timothy Sullivan, Professor Williamson was instrumental in creating a renaissance within the Law School. His dedication to teaching and his expertise in criminal law and procedure, were matched by an unwavering commitment to Marshall Wythe’s progress. The Board of Visitors’ resolution noted that he brought to his role as the Colleges’ Coordinator of Legal Affairs “a sweeping grasp of the law, a rare capacity for quick and sure decisions, and an abiding devotion to the welfare of the whole.”

“The one aspect of Dick’s prowess that always impressed me the most,” said Dean Taylor Reveley, “was his practical wisdom. There are lots of smart people

(Artist Louis Briel painted Dick’s portrait in 2009. The original hangs in the Law School at the College of William & Mary.)

on a university campus. There are far fewer with a deep store of practical wisdom. Dick was one of them. He drew on this store of common sense and his keen understanding of William and Mary to come up, repeatedly, with wise advice about the myriad issues confronting the university. This sort of advice is rare as ‘hen’s teeth’. Dick could give it and did for many years.”

Professor Williamson was a member of the American Law Institute, a fellow of the Virginia Law Foundation, and served on the Foundations Committee on Continuing Legal Education. He was the founding Reporter of Decisions for the Court of Appeals of Virginia from the mid-1980’s until 2002 and wrote 37 volumes of reported decisions.

On Charter Day, 2004, William and Mary honored Professor Williamson with the Thomas Jefferson Award, the highest honor the college grants for distinguished service.

After Dick’s retirement in 2007, he had hoped to donate his time, knowledge, and wisdom of the law to the Legal Aid Society of Eastern Virginia, which provides free and discounted legal services to area residents.