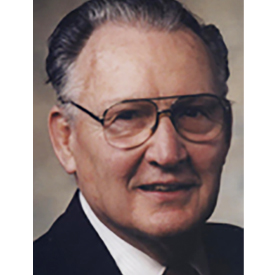 Donald Jenks graduated from West High School in January 1944. He received Varsity letters in both football and track. He represented the Cowboy track team as a “dashman” at both district and state meets. In addition, Don was an active member of the Triangle Club, serving as treasurer and then President for his architectural drafting group. Immediately after graduation, he served in the Air Corps assigned to the 52nd Air Force Reconnaissance Squadron stationed in the Azores during World War II. He rose to the rank of Sergeant and Flight Crew Chief.

Don graduated in 1950 from The Ohio State University, with a Bachelor’s Degree in Education (Industrial Arts). In his 37-year career, he taught at Newark High School, Columbus Boys’ Trade School, Central High School, Linden McKinley High School, and Southeast Career Center. Don taught: Building Trades, Mechanics, Electronics, Drafting, and Photography. He loved teaching and interacting with his students and spent many extra hours after school helping those that needed more help and attention. Upon his retirement in 1987 from Columbus Schools, he received an Excellence in Education Award.

In 1954, Don became extremely invested in the Camp Fire Girls program, due to the fact that his wife and daughters were involved. In fact, he became known as the “Camp Fire Father” to many of the girls in the program. He was helpful to the Camp Fire Council on many projects. He initiated a “Do Dad Day” for fathers to assist in setting up tents for the Day Camp Program. He had on-going participation in the work-weekends to both open and close Camp Wyandot, the residential camp nestled in the Hocking Hills. He also designed and built the “Tree Houses” that remain a popular overnight site at the camp.

Don served several terms on the Camp Fire Board of Directors as Camp Property Chairman. He spent many hours assisting, Cliff, the caretaker at Camp Wyandot. Due to frequent flooding, the caretaker’s home needed to be rebuilt at a higher elevation. Don volunteered three years of his time to design and coordinate the many volunteer workers in building the new caretaker’s home at Camp Wyandot.

This was funded by a grant from the Alfred L. Willson Fund of the Columbus Foundation. The Foundation honored him at a luncheon. Don also received awards from the National Council of Camp Fire: the Ernest Thompson Seaton Award for dedication to the camping program; and the Luther Halsey Gulick Award, which is the highest award given to individuals who have volunteered their time to the Camp Fire program.

Shortly after Don’s retirement in 1987, Cliff, Camp Wyandot’s caretaker became ill. There was a strong possibility that he would lose his position as caretaker, putting himself, his wife, and four children in an unfortunate situation. To prevent this from happening, Don, along with the help of another Camp Fire employee, maintained the camp until Cliff’s death.

Don was also a charter member and Past President of the Westgate Kiwanis. He was recognized with the Legion of Honor for 25 years of service as a Kiwanian.

He had a love for vintage cars, and spent much of his time restoring a 1931 Model A Ford and enjoying his 1962 Ford Thunderbird.

In addition, Don built his own family’s home, and helped build three homes for his daughter and her family.

At the age of 87, Don Jenks passed away surrounded by his loving family on Saturday, October 12th, 2013.