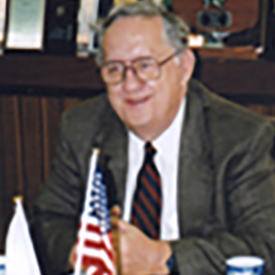 Bradley Moore Richardson was born on September 6, 1928 in Toledo, Ohio. His mother and father met at Denison University in Granville, Ohio. There were many things about Bradley’s childhood that were very typical and traditional for a young mid-western boy at that time. There were also things that were unusual. His grandmother, aunt, and mother were all college-educated.His parents divorced when he was around two years old. From that age on he was raised in his grandparents’ home in West Jefferson, Ohio. He lived at 217 West Main Street with his mother, his aunt until she married, and his grandparents. His grandfather was a businessman who at one time owned a funeral home. During World War II, as a teenager, Bradley helped out at the funeral home. Bradley attended West High School, graduating in 1947 and spoke highly of his teachers, especially his French teacher, Leona Glenn. Although he did not consider himself to be the best student, saw something in him and encouraged him to focus and excel in his academics. Bradley went on to reach highest honors in statewide French and Spanish tests. This same teacher continued to encourage him as he looked at his college options. Thanks to her persistence, he applied to and was accepted by Harvard University. He received an academic scholarship that allowed him to pursue his undergraduate studies. He often shared many stories of the hard work and big fun he had at Harvard, and he shared deep gratitude to his teacher, Leona Glenn, at West High School.

After Harvard University, Bradley earned his Master’s Degree studies at Columbia University in New York City. Next, he served in Korea and Japan in the United States Navy as Lieutenant JG during the Korean War, until 1954. During this time, he met the woman who would become his wife of 57 years, Barbara F. Richardson. Barbara’s father managed the Nikko Kanko Hotel, a Japanese ski resort that was a popular place for “R and R” for American officers. It was during a visit to Nikko that Bradley met Barbara. Nikko forever remained one of Bradley’s favorite places.

Bradley and Barbara married in 1957, once in Japan and again, shortly after, in the United States in San Francisco. They returned to Japan while he finished his tour of duty. Their first child, a son, was born on an American Naval base in Japan in 1958. On their return to the United States, Bradley earned his Doctorate of Philosophy at the University of California at Berkeley.

They enjoyed living in the Bay Area, in El Cerito. They loved the area and the interesting people they met. However, in 1965, when Dr. Richardson was offered a job at The Ohio State University, he was ready to return home and be close to his family. The following year, they welcomed their second child, a daughter.

Dr. Richardson became a Professor of Japanese Studies and Political Science. During the late 1970’s and early 1980’s, he forged strong relationships between Japanese businesses in Japan and Ohio politicians. After Governor Rhodes visit to Japan, Dr. Richardson was monumental in helping secure The Honda Company in locating in Ohio. Over time, his passion for Japan-Ohio and U.S.-Japan relations led him in 1985 to found and be the founding Director (1985-2002) of the Institute for Japanese Studies at OSU. In 1966, OSU granted him the Distinguished Scholar Award. In 1997, Dr. Richardson became a founding Executive Board Member of The Japan-America Society of Central Ohio (JASCO). Through the years, he served

many roles on the Board and on the Programming Committee. In addition, he served as the Director of the East Asian Studies Center from 1977-1980 and from 1999-2002.

From 1999 to 2002, he was appointed as the Honorary Consul General of Japan for Ohio to further strengthen U.S.-Japan relations, as well as with Ohio. In 2003, he was recognized by Governor Bob Taft as a leading scholar in Japanese politics, as well as leading academician in Japanese culture and business.

In 2004, Dr. Richardson was honored to receive the Order of the Rising Sun, the second most prestigious national decoration awarded by the Japanese government, from the Emperor of Japan. The Japanese government awards these decorations to individuals who have contributed greatly to the nation and the public in politics, business, culture, and the arts.

In 2012, in recognition of the 100th anniversary of the U.S.-Japan friendship gift of cherry trees to President and First Lady Taft, several American cities were chosen to receive a new gift of cherry trees. Columbus was one of the cities chosen and Franklin Park was selected as the location for the trees to be planted. One of the cherry trees was planted in Dr. Richardson’s honor for his work with JASCO.

Dr. Richardson’s books include: Japanese Democracy: Conflict, Power, and Performance (Yale, 1997); The Japanese Voter (Yale, 1991); Business and Society in Japan (Praeger, 1981); Voting in Japan (Tokyo, 1977); and The Political Culture of Japan (California, 1973). He has also published articles in the American Political Science Review, Comparative Political Studies, Journal of Asian Studies, Asian Survey, and Journal of Modern Asian Studies. In recent years, Dr. Richardson had received grants from the National Science Foundation, the Honda Foundation, the Japan Foundation, the Fulbright-Hays Commission, and the Comite Conjunto de Intercambio Cultural e Educativo Hispano-Americano. In his final years, though he had retired, he continued to work on writing a new book, which was, unfortunately, never published.

Dr. Bradley Richardson always enjoyed learning about other places and loved to travel. He and his wife were able to travel to many countries spreading over four continents. Those who met him enjoyed his boyish sense of humor and good spirit. He was always curious and interested in other people, wanting to learn more about them. Though a devout Buckeye fan, he loved to spend his summers at his favorite lakeside cabin in Michigan, always with his dog, Sissie Bear, at his side.

Dr. Bradley Richardson lived a full life, both personally and professionally. He was recognized for his outstanding accomplishments in international relations, education and exchange with Japan to the state of Ohio, and for the community of international friendship. He passed away on January 16, 2015.

Surviving Dr. Richardson are his wife, Barbara; his son and daughter-in-law, Paul and Rebecca; and daughter and son-in-law Stephanie and Robert Estice; and grandchildren, Justin, Britney, Hana, Tine, and Sasha.