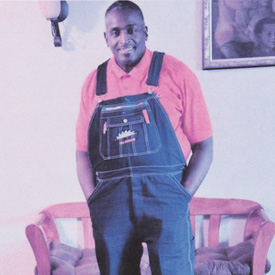 Tennis Wayne Gatewood was born June 9, 1956 in Columbus, Ohio. His mother, Alberta, and grandmother, Lizzie Etta Gatewood, raised him.  Wayne was a standout track and football star while at West High School, graduating in 1974.  Although labeled a “slow learner” in the fifth grade, a label, which took him years to overcome, he earned a scholarship to West Virginia University. While pursuing a degree in management, Wayne earned a 4-year letterman plaque in Football as Offensive Tackle 1975-77 and was Co-Captain in 1977 (he played offensive tackle for Coach Bobby Bowden in the 1975 Peach Bowl, defeating North Carolina State, 13-10). In addition, Wayne earned a 2-year letterman plaque in Track and Field for the Shot Put. As of today, he still holds the West Virginia University record for his 53’ 2.5” throw.

Graduating in 1979 with his business degree in hand, Wayne worked his way through the hospitality industry. He worked for Marriott Hotels, served as Operations Director of the five-million-dollar dining services machine at Honda of America, and as Director of Training and Development for two regional restaurant corporations.  Wayne also became the first African American franchise owner for Donatos Pizza.

After being diagnosed with cancer in 2007, Wayne reinvented himself as T. Wayne Gatewood “The Builder,” by developing a signature STEM (Science, Technology, Engineering, and Math) Workshop – the Math and Science of Carpentry; a skill he learned as a child from his Uncle Nate.  He taught youth how to overcome the fear of math and science in a hands-on, fun learning environment. His “Secret Weapon”, the Academic Assault Vehicle (AAV), was a classroom on wheels that allowed him to take his workshops on the road. Always wearing “bib overalls”, he made students not feel intimidated by what he was teaching them. He was authoritative, but down-to-earth. He talked to them on their level and made them feel like they were learning something special and useful. He was dedicated to helping young students learn new tools (not the kind you use with your hands); skills that would help them navigate throughout their lifetime.

Wayne used his “gift of gab” by becoming a member of Toastmasters and a Les Brown Platinum Speaker. He was a man with a huge heart, infectious smile, and a sense of humor that cannot be replaced. He touched the lives of so many, young and old, through mentoring, teaching, coaching, and speaking. He never met a stranger and he believed in paying his blessing forward, which is evident through his work with the National Youth Sports Program (NYSP) and the Health Sciences & Technology Academy (HSTA), both programs at West Virginia University.  In addition, he worked with the Mansion Day School, Columbus City Schools, YMCA, J. Ashburn Jr. Youth Center, Inc., Columbus School for Girls, and numerous others.

Wayne was a 27-year member of The Columbus Bible Way Church, Inc., where he served on the Deacon Board, Men’s Fellowship, and Ambassadors for Christ Leader and Camp Director. He was also a Driver for Jets for Jesus and Sunday school. He, along with Pastor Michael Lester, created the King Josiah Boys Mentoring Camp with the mission of “Building Boys Instead of Fixing Men”. In addition, Wayne co-authored a book titled, “Charley Browne the Class Clown”, an autobiography of his life.

Wayne departed this life on May 29, 2015, at the age of 58, after a courageous 8-year battle with cancer.  He leaves behind to cherish his memory, his loving wife of 38 years, Dorothy D. Gatewood; children: Kia (Phillip) Merrifield, Wayne (Amanda) Gatewood, and Kerry Gatewood; adopted children: Edith (Harvey) Richardson, Julian Davis, and Le’Kisha Graham; grandchildren: Sydni, Nathaniel, Siam, Titus Wayne, and Sasha.

In 2018, the Hilltop YMCA posthumously dedicated a community garden bearing the name of: T. Wayne Gatewood “The Builder”.

Wayne has stated, “I have had many people help make a way for me. Passion is contagious; so, go all out because you never know who is watching. I have found that most people want to see young people succeed, especially when they see how passionate they are about their dreams.” As Wayne puts it,” We come, we build, we learn.”