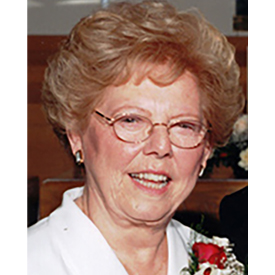 Patricia Louise Cozad Smart was born on August 12,1929, and died November 8, 2006, after a hard-fought battle with cancer. She was under treatment at The James Cancer Hospital at Ohio State University.

As a student at West High School, Pat was active in many roles and activities including: Chemistry Club, Debate Club, Latin Club, Thespians, Vice President 3, Room Civic Chair, Glee Club, Choir, Variety Show, Senior Class Play, Dramatics Club, “Y” Teens, L Society, Treasurer 3, Vocational Conference, Scholarship, and scrap and paper drives. She was also a member of the National Honor Society. Pat graduated in 1947 and began a family legacy, with her sister Eleanor, graduating in 1952, and daughters, Becky in 1975, and Brenda, in 1977. Beverly, her youngest daughter, graduated from Briggs High School in 1979.

Three days after her wedding in 1951, her husband left for military service in Korea. Upon his return, they moved to Indianapolis, Indiana. Her work at Methodist Hospital included teaching a class in surgical nursing. After returning to Columbus, Pat became a public health nurse for that city. She was featured in the Sunday section of the Dispatch for her work. Beginning in 1957, she took the next twelve years off to raise her three daughters, Becky, Brenda, and Beverly. On occasion she worked at polio clinics, in private nursing, and as a substitute school nurse. This is where she discovered her passion for school nursing. In September 1969, she began working for the Columbus Public Schools. She retired after twenty-five years, with twenty-two of them being at West High School. As a single parent, Pat really enjoyed being on the same schedule as her daughters.

When Pat began her career in the Columbus Public Schools, she served at various elementary schools in the Hilltop and Franklinton areas. She also served as a school nurse at Hilltonia Junior High and West High School. Serving half-days, she worked as many as five schools at a time. She began her primary assignment as the school nurse at West High School in the fall of 1972.

At her West High School office, students often dropped by to talk and Pat always had time to carefully listen. She even took one student in dire need of eyeglasses to an ophthalmologist and purchased glasses for him. Pat was always eager to help and care for her students.

On Fridays during football season, she always wore scarlet and gray, the colors of her beloved Ohio State University. For thirty-two years, she ushered at all home football games and for ten years she was a head usher on the West side of C-Deck. Pat was among the first women to hold that position.

One of the highlights of her time at West High School was her marriage in 1980 to chemistry teacher Sid Smart. Many students and staff congratulated them when they announced their engagement. They were very happy and especially enjoyed traveling, visiting six continents, eighteen countries, and many states. After Sid died of an inoperable brain tumor, Pat established the Sid Smart Scholarship in 1991, for a West graduate entering the field of science. Upon Pat’s death, her daughters changed the scholarship to the Pat and Sid Smart Scholarship. This is the twenty-seventh year the scholarship has been awarded. Pat would be thrilled to know that their legacy continues to make a difference in the lives of students pursuing a science career.