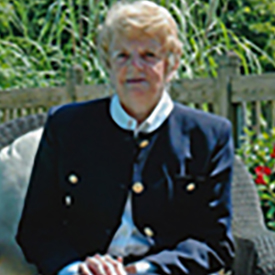 Dorance started school at West Broad Elementary, but left in the second grade when her parents moved to northeast Columbus where she then attended Mifflin Elementary. When she was in the eighth grade, her family moved back to the westside and she entered Hilltonia Junior High. Dorance’s parents were Roy and Rose Mary Elliott Nichols. Her mother would have been in the 1944 West class, but moved when she was in the tenth grade. She then attended Millersport High School. Dorance has two younger brothers. Richard chose to go to Central High School (Class of 1968). Dean is a 1976 West graduate. Dorance and Jack have been married for 46 years. Their son, Matt (age 40), has a daughter, Fern, who is five years old. Dorance’s, step-daughter, is Jenifer (age 50). She and Irnex live in Kissimmee, Florida with their 18-month old daughter, Rowen.

After Dorance was graduated from West in 1963, she accepted a job in the Data Processing Department at Grange Insurance Companies. In 1971, she took a job as a computer programmer in the same department as her future husband, Jack. When they married in 1972, Dorance joined her former boss in starting a new department that would coordinate and document company projects. That move took her through the rest of her career where she became the Manager of the Methods and Procedures Department. She attained the Association for Systems Management CSP (Certified Systems Professional) designation; completed the Insurance Institute of America AAM (Associate in Automation Management) program; received the National Association of Insurance Women CPIW (Certified Professional Insurance Woman) designation; received the Key Person Award for service to the YMCA; was recognized by Otterbein University as a National Collegiate Communication Arts Awards winner; and was recognized by COTA for her seven years working with the Christmas Lights Tours program. Also, Dorance and Jack were given the United Way Leadership Contributors award. In addition, Dorance was the first woman at Grange Insurance to complete the CPCU (Charter Property Casualty Underwriter) designation. During this time, she took classes at Otterbein University, pursuing a Business Organizational/Communications degree. She was near graduation when she retired.

In 1994 Jack and Dorance qualified for an early retirement program being offered by Grange. This allowed them to pursue a new pathway. Jack had already been teaching scuba diving part-time at a local business, so when the owner asked Dorance to work two days a week ordering inventory, she accepted. Working in the store led Dorance to get scuba certified. Working in the scuba industry provided them with opportunities to take dive trips worldwide. They continued working in the scuba industry until they, once again, retired.

Dorance became aware of the West Alumni Association when co-worker David Westlake (1953) gave her the second Alumni Occident newsletter. She joined immediately and soon afterwards, she agreed to be her Class Representative! In 1998 Dorance attended a Nomination of Officers meeting and through a “chance talk” with Sharon Dent Pennell (Jan.1958) Sharon asked Dorance to take her position as treasurer. Dorance was elected and held the position of Treasurer for four years. In the spring of 2000, she volunteered to be the Alumni Occident Editor, a position she held for 11½ years. In 2013, she encouraged the Association to offer an e-mailed newsletter to save on costs, as well as having the pictures be in color. Since leaving the editor position, she has continued to write many of the articles and take most of the pictures.

She assembled an Alumni Occident Library and a West Yearbook Library through donations. The Yearbook Library now has one yearbook for every year except for the years 1913, 1917, and 1994. There are currently 263 yearbooks for sale with about 200 alums on a yearbook wait-list that she maintains. To date, she has sold 394 yearbooks! Five years ago, Dorance donated 34 yearbooks to the Ohio Genealogy Society for their Permanent Record Department. The proceeds of all yearbook sales go to the Alumni Association Scholarship Foundation. This year, 35 yearbooks were donated to the Columbus Public Library.

In 2013 West’s athletic director asked Dorance if she could raise $3,500.00 to purchase some much needed weight lifting equipment. They had a source for some ‘gently’ used equipment, but needed to act quickly. Dorance began by asking alums that had been involved in sports for help in securing the funds. The response was phenomenal! 49 very generous alumni donated a total of $9,645.00. A very appreciative, Dorance, made a poster with the names of all who donated and it remained on display in the school’s lobby for two years. Sharon Dent Pennell (Jan.1958) agreed to chair a committee to determine how to spend the remaining money for a variety of West athletic projects. The last of the money was used to help with the purchase of new buff and brown football uniforms. Another request came from the wrestling program to help cover the expenses of a few top wrestlers wishing to attend a significant summer training camp. Once again, Dorance called for alumni help and the wishes of the wrestlers were granted.

The West Athletic Boosters asked the Alumni Association to take over the football and basketball concessions in 2014. Dorance agreed to lead this program. Using the 2014 football season as a training period, the Association took over the concessions at boys and girls basketball games, as well as at wrestling meets. Once again, Dorance asked for help and she received it. Many alumni volunteer for these events. A portion of the concession proceeds help support the Alumni Association with a majority of the money going to support programs for the West students. In 2014 and 2015, the West Athletic Director chose Dorance to receive the Ohio High School Athletic Association “Respect The Game” State Award for her involvement with the West students.

Dorance’s personal interests include flower gardening and stone carving. In 2014, she won a blue ribbon at the Ohio State Fair for a Miniature Garden Display. She was also chosen to include a stone-carved piece in the Fine Arts Display at the Ohio State Fair. She has won two awards at the Grove City Arts in the Alley for her stone carvings. She has taken classes in weaving, bronze casting, clay sculpting, and copper enameling.

Without having Jack’s support, most that Dorance has accomplished could not have been done, and that includes her volunteering with Alumni Association activities. With much gratitude and appreciation she also shares this Hall of Fame recognition with all alumni who have volunteered at our Association programs. Without our volunteers we would not be the successful Association that we have been in the past and will continue to be in the future.