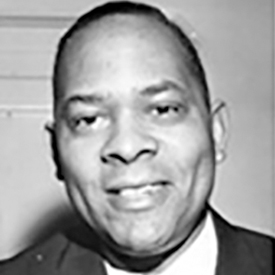 Russell Luther Carter was a soldier, attorney, judge, public servant, poet, and champion for the civil rights of all people. He was born April 10, 1919, one of eleven children of William F. and Mary Royal Carter. Carter graduated from West High in 1936 where he was a member of the baseball team and the German Club. He received a bachelor’s in business from The Ohio State University in 1940 and his law degree from Harvard University Law School in 1947, the same year he became the first black assistant prosecuting attorney in Montgomery County.

Carter enlisted as a private in 1941, served in the European Theater of Operation during World War II and received his discharge as a lieutenant, Coast Artillery Corp. in 1945.
In 1947, he became the first black assistant prosecuting attorney in Montgomery County; in 1959, the first black superintendent of the budget for the State of Ohio; and in 1962, the first black candidate for statewide elected office in Ohio when he ran for a newly-created seat as Congressman-at-large.

In 1953, Carter was appointed to the bench of Dayton Municipal Court by Gov. Frank J. Lausche. He served on the Dayton Civil Service Board from 1966-1974. Some of his most historic legal work came from 1948-1963 when he was legal counsel for the Ohio Conference of the National Association for the Advancement of Colored People.
In this capacity, he represented the plaintiffs in the first successful school desegregation case in this country, along with his friends Thurgood Marshall, who became a U.S. Supreme Court Justice, and Constance Baker Motley, who became the first African-American woman to serve as a federal judge.

The case in Hillsboro, Ohio came two years before Brown v. the Board of Education. Carter’s obituary program says: “He lived his life so that future generations would no longer have to be distinguished as the first ‘black’ this or that, but as the ‘best’ at whatever they sought to achieve.”

For 49 years, Judge Carter was an active member of Bethel Baptist Church and an emeritus trustee and legal counsel. He took great pride in the fraternal organizations which shaped his character and forged lifelong friendships, Kappa Alpha Psi Fraternity Inc., Prince Hall Masons and Shriners; and Sigma Pi Phi Fraternity.

Judge Carter’s wife of 54 years, Esther Scott Carter, died in 1999. He is survived by their daughter, Esther Carter; a sister, Mary Carter Glascor ‘34; and a host of other relatives.