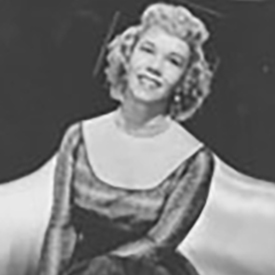 Susan Johnson, West High Class of 1945, was remembered in the following article by theater critic Michael Grosberg, which ran in the March 6, 2003 edition of the Columbus Dispatch : Susan Johnson, a Columbus native and Broadway performer, will be remembered for her exuberant personality and strong singing. Johnson, born Marilyn Jeanne Johnson in the Hilltop area, died February 24 in Sacramento , California.

She attended West High School and The Ohio State University. To Broadway fans, she is remembered for singing Big D on the original cast album and in the original New York production of The Most Happy Fella. She played Cleo, the tough-talking waitress, in the Frank Loesser musical. She also played a singing nun in the 1992 film Sister Act. Between the late 1940s and 1961, Johnson appeared in the original Broadway production of Brigadoon and a 1950 City Center revival, and in short-lived Broadway runs of Buttrio Square, Whoop-Up, Donnybrook! and Oh, Captain!

“She was a very brassy belter, with an exuberant personality that transcended most of the mediocre shows that she was

in,” said Alan Woods, director of OSU’s Lawrence and Lee Theatre Research
Institute. Woods saw Johnson in Donnybrook! and Whoop-Up. She starred in a Kenley Players revival of Brigadoon in 1962 at Veterans Memorial, prompting Dispatch critic Sam Wilson to praise her as “a brilliant comedian” and “commanding” singer.

Johnson, reportedly 75, had suffered from emphysema for a decade. She retired in the 1980s to Sacramento, only occasionally making stage appearances. A Playbill article by Kenneth Jones from February 26, 2003 reads: “She was bigger than life, funny as hell and had a mouth like a sailer, but in a wonderful way.” Per Martha Kight, a Sacramento actress who got to know Ms. Johnson 20 years ago: “She was a gracious, kind friend, an hilarious firebrand — as well as a grand star — to the end of her life.”