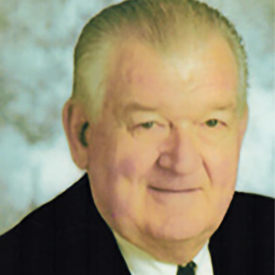 While a student at West, he played tackle on the 1947 undefeated City Championship team. Robin was also a member of the track team where throwing the discus was his event. He excelled to winning a fifth place in the discus event at the State Meet in 1948. However, he discovered that his true passion was in art which was guided by his art teacher, Walter (Doc) Campbell. His love of art led to his career in interior design.

Robin was just a junior at West, when he and several classmates joined the Marine Corps Reserves in1948. He was the proud member of Company “C” and trained at Fort Hayes in Columbus and at Camp Lejeune, North Carolina. On September 4, 1950 he was sent to Camp Pendleton, California for further training. On November 10, 1950 he landed at Wonsan Harbor in North Korea. As a sergeant and machine gun squad leader for the 1st Regiment of the 1st Marine Division of Fox Company’s 2nd Battalion, he led a march in the epic battle at the Chosin Reservoir. They fought the Chinese Communists for nearly three weeks in the bitter cold winter of 1950. Robin experienced frostbite as a result of the temperature plunging to 35 degrees below zero. During the spring offensive of 1951, he also led his squad in two major battles: Operation Killer, where he was awarded the Purple Heart, and Operation Ripper. Robin endured the pelting of gunfire on the ground and a mortar shell landing within eighteen inches of his foxhole. In addition, his health was compromised. He experienced: pneumonia, tetanus, typhoid, Japanese encephalitis, and an evacuation via ship to Japan, while overcome by delirium, before making his way back home on Christmas Eve, 1951.

After being discharged in April 1952, he enrolled at The Ohio State University majoring in Fine Arts. He received his Bachelor of Fine Arts in 1956. While at OSU he earned three varsity letters in lacrosse, served as President of the undergraduate Varsity “O” Association, and served on Student Council. He also became a member of Sigma Phi Epsilon and was the recipient of the Outstanding Pledge Award. In 2016 he was honored with the Robert Barnette Outstanding Award for his many years of service to the fraternity.
Robin’s professional life began as a designer for the Columbus Showcase Company in 1956. From 1958 to 1965 his career flourished at the Abel Corporation, where he was the Executive Vice-President and Director of Store Design (planning and construction). He moved to The Shoe Corporation of America where he was the Director of Store Planning from 1965 to 1986. In 1986 he formed his own design firm, Robin Schmidt Design, Inc.,

Robin was never one to be idle, so his involvement in many community activities was inevitable. He was a member of the Liturgical Arts Guild from 1972 to 1973 and a member of the Ohio Arts Council from 1978 to 1979. In 1975 Robin was Chairman of the Greater Columbus Arts Festival and from 1978 to 1979, he was a Board Member of the Greater Columbus Arts Council. He served as President of Capital Square Ministries, Inc. in 1981. Robin even found time to serve as President of the West High School Alumni Association from 2007 to 2008, of which he is a Life Member. Other organizations in which he has been active include: Master Mason Hilltop Lodge, The Ohio State University Alumni Association (Life Member), The OSU Varsity “O” Association (Lacrosse, 1953-1956), Sigma Phi Epsilon Fraternity, and The Ohio State University Golf Club.

In 1973 he became a professional member of the American Society of Interior Design (ASID). He was active on the local and national level serving as President of the Ohio South Kentucky Chapter and the National Board as Regional Vice-President. While active in ASID, he received the Medalist Award and the Presidential Citation Award. In 2003 he was elected to the College of Fellowship of ASID. He is listed in Baron’s Who’s Who in Interior Design, Marques, Who’s Who in the Midwest, and Who’s Who in the World. Robin was the “Honored Guest” at the Upper Arlington Civic Association’s annual Memorial Day event in 2015. He fired the “ceremonial shot” to start the Memorial Day 5-Miler at the corner of Lytham and Reed Roads.

A major highlight of Robin’s life happened in April, 2013, when he and his great friend, Jack Kelly (West High Class of January 1949), were among the first Korean War veterans to take an “Honor Flight” from Columbus to visit this country’s War Memorials in Washington, D.C. From the moment they arrived at Baltimore-Washington International Airport to the time they landed back in Columbus, the entire experience touched their hearts. Strangers stood, applauded, and saluted as the veterans passed by on their tour. Everyone, including children, thanked them for their service. Robin and Jack commented, ”It’s really kind of a life-changing experience, even after all these years.”

Another major highlight of Robin’s life is his sixty-year marriage to his wife, Jan, and their three children, Shely McBride, Robin Lucas, and Jay Schmidt. In addition, they have seven grandsons and one great-grandson.