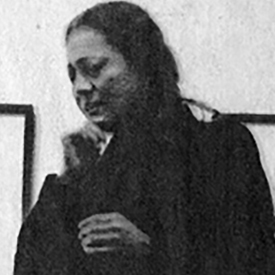 Mei-Tei-Sing’s interest in art began as a child when her father took her to the home of one of his acquaintances, Emerson Burkhart, a noted and acclaimed Columbus painter. She began painting on her wall at home, because “Emerson Burkhart painted over everything.”

Mei-Tei-Sing lived with her parents, James and Chayong Smith (both are now deceased), her brothers, Ooloong (West Class of 1968) and Jamyl (West Class of 1973), and her two sisters, Mei-Ling Smith Nelson (who died in 2012) and Ming (West Class of 1965). Her grandparents, her father, and his siblings were all raised on the north side of Columbus. Tei-Sing’s father and his sisters all graduated from The Ohio State University. Her aunt makes yearly contributions to the OSU Pharmacy School, where there is a scholarship fund established in her grandmother’s name. Tei-Sing was raised around several mediums of art, as many of her family members are or were artists. Her father, James, was a pharmacist, a photographer, and an artist who worked on the east side of Columbus. Her grandmother was an artist, a poet, and enjoyed reciting poets like Wordsworth. Her grandfather helped build a church on the east side of Columbus and enjoyed teaching Sunday school there. Her brothers and sisters are artists, as well.

While a student at West High School, Tei-Sing participated in Student Council, Art League, G.A.A. (Girls Athletic Association), G.A.A. Cabinet, Y-Teens, Drama Club, and Class Teams. She played on the Interschool Basketball and Softball teams and was a gym monitor. In addition, Tei-Sing was honored by being elected Homecoming Queen (the first Black student) her senior year. After graduating from West in 1970, she attended Howard University in Washington, D.C. and completed her Bachelor of Fine Arts Degree from Tufts University in Massachusetts. She continued her education at The Boston Museum School and was awarded a Master’s in Fine Arts Degree from City College of New York. Tei-Sing has taught at both Cooper Union School of Art and New Jersey City University.

It was while she was the Traveling Exhibits Coordinator for the New York Public Library’s Shomburg Center for Research in Black Culture, that Tei-Sing connected with Teresa Weidenbush, the Fort Hayes Metropolitan Education Center’s Art teacher (who manages the Art Gallery there). She encouraged Tei-Sing to bring her artwork to display at The Shot Tower Gallery. The exhibit ran from March 6 to March 31, 2006. Tei-Sing presented forty-five monoprints, etchings, and lithographs from her series entitled, “Series Us,” as well as new work from her “War and Mainstream” series. She stated that her “goal is to create works that promote sensitivity to certain experiences – especially those that emanate from the experience of being black in America.” She achieves this through the use of symbolism and by “appropriating imagery replete with cultural significance.”

In 2001 MTA Arts for Transit in New York City, commissioned Robert Blackburn (a master printmaker and founding member of the Printmaking Workshop in Harlem) to create a work for the 116th Street Subway Station in Harlem. Due to his failing health, he chose Tei-Sing (a Beardon Fellow at the Printmaking Workshop) to assist him on what would prove to be his last major project. An article from The Bronx Museum of the Arts described the work, “Glass Mosaic on Platform Walls” as “dynamic abstract patterns rendered in mosaic suggests the color and movement of the streets above that the artist shapes into beautiful artwork for the subway station.” Once it was completed, the maquettes were enlarged and manufactured into ceramic and glass mosaics. The twelve murals were installed in 2005, under Tei-Sing’s guidance, two years after Blackburn’s death.

Tei-Sing has exhibited widely in places such as The Bronx Museum of the Arts, The National Center for African American Artists in Boston, and the Cabo Frio International Print Biennial in Rio, Brazil. She is featured in many collections including the U.S. Library of Congress, the Schomburg Center for Research in Black Culture (where she has been employed), and Fisk University.