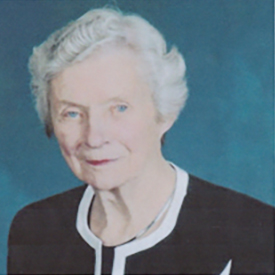 Lucille M. Burkett was an outstanding person, teacher, coach, and a national professional leader in Physical Education. She touched many students’ and colleagues’ lives through her dignity, loyalty, determination, perseverance, and enthusiasm. She peacefully passed away on November 3, 2017 at the age of 94.

Lucy was a native of Columbus, Ohio. She graduated from West High School in 1941. While at West, Lucy was a member of Student Council, Orchestra, Latin Club, and the Photography Club. She participated in intramurals in 1939,1940, and 1941. Her Senior Year, she was elected President of the G.A.A. (Girls Athletic Association) and served as the 1941 Class Treasurer.

After graduation, Lucy attended The Ohio State University and earned a Bachelor of Science Degree in 1945, followed by a Masters’ Degree in 1946. She began her teaching career at Ohio State, serving as an instructor from 1946 to 1952. In 1952, Ms. Burkett became the Head of Girls’ Physical Education for Shaker Heights High School. This position paved the way to her becoming the Coordinator for Physical Education and Athletics for Shaker Heights Public Schools until her retirement in 1986.

From 1974–1975 she was President of the National Association for Sport and Physical Education where she successfully attained the right for students to have daily physical education in all schools in the United States. She was at the forefront of Title IX of the Education Amendments of 1972, and the relationship of the federal statute to competitive sports for women. She paved the way for the success of women’s sports that we know today.

Ms. Burkett’s work in the area of physical education was massive, but she deserves significant credit for the expertise she brought to the committee that created Ohio’s first curriculum guide for physical education in the 1960’s.

Lucy was an avid Ohio State Buckeye fan and proudly wore her scarlet and gray, especially during “Michigan Week”. She always had time for, and an interest in those with whom she worked and played. Many former students, as well as colleagues, have indicated that she was an inspiring mentor.

Lucille Burkett, fondly known as “Burkie”, was a mentor to hundreds of persons at the national, state, and local levels pushing them to reach for their best on the athletic field, as well as in life performance. The world was her classroom and her message was quality physical education and sport for all.