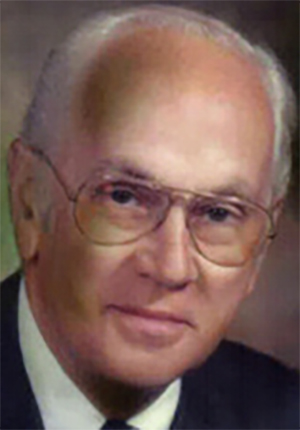 Dr. Robert Gates Trout was a pioneer in open-heart surgery and the Chief of Thoracic Surgery at Philadelphia Presbyterian Hospital for twenty-five years ending in 1987. He was born in Marietta, Ohio and raised in Columbus, the son of Horatio Gates and Lorella Crouse Trout, and brother to James William. Dr. Trout’s father, a vocational education teacher at West High School, instilled in him an interest in tools and gadgets, as well as a thirst for knowledge about how things worked. He became a woodworker, amateur plumber, electrician, carpenter, and painter. He took these skills with him first to Ohio Wesleyan University, and later to Battelle Labs and Hahnemann Medical College, and then into the operating room!

While at West High School, he was inducted into the “L” Society (Literary Society members are chosen on the basis of scholarship by maintaining a 3.5 average at the end of one and a half years of high school. Every member must join one of four groups of interest: music, dramatics, art, or debating. They must also possess high qualities of character and be leaders in school activities. Information taken from yearbooks dated 1937 to 1939.), he was a member of the National Honor Society, and the Chemistry Club of which he was President in 1940. Bob was a member of the French Club, of which he was Secretary in 1939, as well as being a member of the German Club, an Office Monitor, and participated in the Shakespearean Festival. He also belonged to the Photoplay Club and Science Club. He participated in the school productions of “Eliza Goes To Town” and “Pirates of Penzance”, and was on the make-up committee for “H.M.S. Pinafore” and “First Lady”. In addition, he was also chosen to attend the Rotary Luncheon.

Dr. Trout joined the Navy during World War II and served in the Navy Reserve from 1942 to 1949. During this time period, the Navy sent him to medical school. He was called to active duty during the Korean War as a Lieutenant Junior Grade serving as a medical officer. He participated in the landing at Inchon on the west coast of Korea. He was honorably discharged as a Lieutenant Senior Grade in 1954. He was awarded the World War II Victory Medal, American Theater Medal, Good Conduct Medal, National Defense Service Medal, and the Korean Campaign (3 stars) United Nations Medal.

The publishing house, McGraw-Hill, asked Dr. Trout to write a book on open-heart surgery. In 1959, The Practical Evaluation of Surgical Heart Disease was published. Along with two other doctors, he founded a thoracic surgery practice in Philadelphia, which later moved to Presbyterian Hospital. This was the first incorporated professional association in Pennsylvania. Dr. Trout received both the Billings Gold Medal and the Bronze Medal from the American Medical Association.

Dr. Trout was a founding member of the Society of Thoracic Surgeons, the Pennsylvania Association for Thoracic Surgeons, and the Philadelphia Academy of Cardiology. He was also an active member of nearly a dozen other professional associations. He pioneered a procedure called “mitral commissurotomy” in which tiny cuts are used to break-up calcification on the mitral valve. Dr. Trout also designed some of the earliest heart-lung machines. In 1963, he performed one of the earliest dual valve replacements using artificial heart valves. In the 1960’s, Dr. Trout traveled with a nursing team demonstrating the new techniques of this procedure at international conferences on open-heart surgery.

From 1962 to 1987, he was Chief of Thoracic Surgery at Presbyterian Hospital in Philadelphia where a plaque is displayed in his honor. For centuries, the guidance given to physicians was never to touch the heart. Only bad things come, they were told, from laying hands on a vital organ. Dr. Robert Trout was one of those early surgeons who first laid hands on the heart and healed people by taking that risk. He witnessed the first four open heart procedures conducted in the United States, and went on to perform many others.

In addition to his love of medicine, he loved flying. He became a pilot in his mid-forties, flying mostly single engine Cessna’s and then progressing to a twin-engine plane toward the end of his twenty-year stint as a pilot. He flew his children back and forth to college, flew to Ohio to see his aging parents, and, simply, flew for fun! He had a cadre of friends who enjoyed this with him. They flew to Canada to go on fishing trips and enjoyed snacking and communing in small airport coffee shops.

According to his daughter, Ellen, he was a “Renaissance man.” She recalled that when she was in middle school, he would tell her, “When I decided to become a surgeon, the world lost a great thespian.” He loved reciting entire Shakespeare soliloquies after dinner as well as the poems of Robert Service, and “The Face on the Barroom Floor” by John Henry Titus.

Dr. Robert Gates Trout died March 4, 2013 of complications from a stroke. He left behind his wife Anne, a daughter, Ellen Bennett, a son, John Robert, and three grandchildren. His oldest son, William Gates Trout, predeceased him (2008). The obituary in the Philadelphia Inquirer called him a pioneer in open-heart surgery.