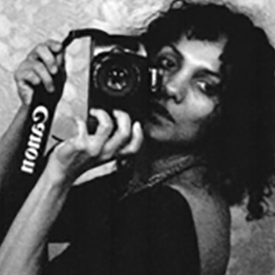 Ming Corazon Smith was born in Detroit, Michigan and raised on the west side of Columbus, Ohio commonly called the Hilltop. Ming started her education at Highland Elementary School and has many fond memories. According to a newspaper article from 2002, she remembers taking her mother’s Brownie camera to Kindergarten so she could take a photo of some of her friends. Little did she know, that it would eventually lead her to a successful career as a photographer. While at West High School she was active in A.Y.G.C. (American Youth for God and Country), V.C.Y. (Victorious Christian Youth), G.A.A. (Girls Athletic Association), Y-Teens, and Spanish Club, as well as being an office monitor. She was on the Girls Interschool Basketball Team, the Track Team, and participated in intramurals, Class Team, and the Senior Orchestra. She was also selected as a Hilltop Relay Queen.

In 2002, at the time the Upper Arlington newspaper article was written, James and Chayong Smith still lived in the home where Ming grew up in. Sadly, both are now deceased. She has two brothers, Ooloong (West Class of 1968) and Jamyl (West Class of 1973), and two sisters, Mei-Ling Smith Nelson (who died in 2012) and Mei-Tei-Sing (West Class of 1970). Her grandparents, her father, and his siblings were all raised on the north side of Columbus. Ming’s father and his sisters all graduated from The Ohio State University. Her aunt makes yearly contributions to the OSU Pharmacy School, where there is a scholarship fund established in her grandmother’s name. Ming was raised around several mediums of art, as many of her family members are or were artists. Ming’s father, James, was a pharmacist, a photo-grapher, and an artist who worked on the east side of Columbus. Her grandmother was an artist, a poet, and enjoyed reciting poets like Wordsworth. Her grandfather helped build a church on the east side of Columbus and enjoyed teaching Sunday school there. Her brothers and sisters are artists, as well. Ming was married to noted jazz musician, David Murray. The have two sons, Kahil and Mingus.

After graduating from West in 1965, Ming went to Howard University in Washington, D.C. with a goal of entering the medical field, because her grandfather wanted her to become a doctor. She seriously considered this until she picked up a camera and took her first art class in college. She graduated with a Bachelor of Science Degree in Microbiology, but she eventually followed her passion for the arts. She briefly studied dance at Boston University, before moving to New York City to begin a successful modeling career. She continued to follow her passion in photography, and, on a whim, she submitted some of her work to an open portfolio call at MoMA (The Museum of Modern Art which is located in Midtown Manhattan in New York City), which resulted in an early acquisition.

According to an article by Siddhartha Mitter (February 7, 2017), “her work, all black-and-white, technically inventive, and aesthetically poised between documentation and dream – often playing with blur, double exposure, low light – earned acclaim from photography scholars and no less than Gordon Parks.” (Gordon Parks, 1912-2006, was an American photographer, musician, writer, and film director who became prominent in U.S. documentary photojournalism in the 1940’s through the 1970’s. He focused on issues of civil rights, poverty, and African-Americans, as well as glamour photography.) In 1972, Ming Smith became the first woman admitted to the Kamoinge Workshop, which had been founded in 1963 in Harlem. It is an association of several generations of African-American photographers that provides crucial support and networking for its members.

Ming’s career was formally introduced with the publication of the “Black Photographer’s Annual” in 1973. She is known for her “informal, in-action portraits of Black cultural figures, from Alvin Ailey to Nina Simone and a wide range of jazz musicians.” Ming has traveled worldwide, photographing famous landmarks and beautiful landscapes. People, though, continue to be her most treasured subjects. Her early style was, “to shoot fast and produce complicated and elaborate images in the developing and post-printing processes, so that many of her pictures carry double dates.” She experimented with hand-tinting in “My Father’s Tears, San Miguel de Allende, Mexico” (1977/1979). Ming continues to expand the role of photography with her exploration of image and paint in the more recent, large-scale Transcendence series. Ming’s place in photography’s 175-year history was recognized by her inclusion in the Museum of Modern Art’s groundbreaking exhibition “Pictures by Women: A History of Modern Photography” in 2010.

Ming Smith’s photography is held in collections in the Museum of Modern Art, New York; the Schomburg Center for Research in Black Culture, New York; the Smithsonian Anacostia Museum & Center for African American History and Culture, Washington, D.C. and the AT&T Corporation.