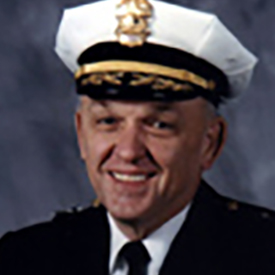 Bob graduated in June 1955. While at West, he participated in football, track, and student council.

He began his college degree in September 1955 at The Ohio State University. While attending OSU, he served as a volunteer coach and scout for the West Cowboys football program under Coach Schmitter. He also worked for the Columbus Recreation Department as a recreation leader.

After graduation from The Ohio State University in June 1959, he served a six-month military obligation with the Ohio National Guard. In September 1960, Bob began teaching health science at Everett Junior High School in the Columbus City School District.

In December 1960, Bob left the teaching profession and entered the Columbus Police Training Academy. Over the next 40 years, he held various positions and rose through the ranks to the Deputy Chief of Police.

During his career, he was well respected and trusted by his peers, subordinates, civic, and city officials. Bob retired as Deputy Chief of Police in January 2001.

Bob has several hobbies. He loves setting up his Lionel Trains and displaying them for all to enjoy. He also takes pleasure in working in his garden and taking care of his lawn.

Bob is a big fan of OSU football, high school football, college and high school baseball and basketball, and traveling with family and friends.

Bob is an elder of the Galloway Presbyterian Church. He is also a member of the Westland Area Business Association and has served on various committees for the Southwestern City Schools District. He has also volunteered as a mentor to some students in this district.

Bob and his wife, Darlene, have lived in the Galloway area for over 45 years. They have 4 children, 8 grandchildren, and 1 great-grandchild. Bob and Darlene would like to honor the memory of the late Patricia Kern.