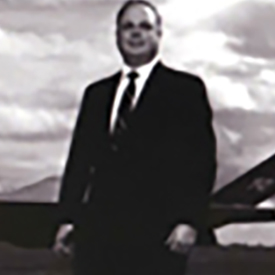 Bob would have graduated with the June, 1957 class, but his family moved at the beginning of his senior year. He considers West his “Alma Mater” and regularly attends the class reunions.

Bob’s first seven years were spent at Boeing where he participated in the aerodynamic and configuration design of Boeing’s entry to the Light Weight Fighter competition. He was with Northrop for 22 years, starting with aerodynamic and performance analysis of the YF-17 prototype. He then progressed to be Manager of Advanced Design and followed that to be Chief Engineer of the Advanced Tactical Fighter Program throughout the ten years of the program.

Upon retirement, he was appointed Professor of Engineering and Applied Science for The George Washington University at the NASA Langley Research Center in Virginia where he performed research in multidisciplinary design and taught aircraft design at the graduate level.

Bob is the first named inventor on both the F-20 Tigershark and the YF-23A Advanced Tactical Fighter. He is a certified Flight Instructor with over 2600 flight hours. He is also a registered Professional Engineer in the states of Washington, California, and Virginia.

He is a Fellow of the American Institute of Aeronautics and Astronautics from which he received the 2006 Aircraft Design medal. Bob is also a Fellow of the Institute for the Advancement of Engineering from which he received the Chuck Yeager Distinguished International Aeronautical Achievement Award. He was awarded the SAE 1999 Wright Brothers Medal.

Bob and Marcia (from Long Beach, California) have been married for 28 years and reside in Yorktown, Virginia.

Bob has three children: Sharon (Troxell), a homemaker in Flint, Texas; Shelley, a habeas corpus lawyer in San Francisco; and Robert III (Trey), an Assistant District Attorney in the Bronx, New York. He has three grandchildren in Texas.