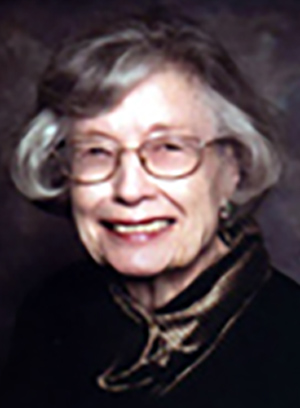 Helen received three degrees from The Ohio State University, including a Ph.D. in Social Work in 1969. She actively served in the U.S. Navy from 1944-1946.

Helen began with the Columbus Diocese Catholic Social Services as a social worker in 1946 and served as director from 1971 until her retirement in 1985. She held numerous leadership roles in social services both locally and nationally. She was a member and past President of the National Conference on Catholic Charities based in Washington, D.C. She chaired the advisory committee of National Church Residences and was instrumental in the development of the Hilltop Senior Village on Wilson Road. Family members recall her pointing to that land and saying that there should be affordable senior housing on that property. They knew that Helen’s charm, motivation, and leadership would make this “dream housing” a reality.

Following her retirement, she participated in The Women’s Health Initiative to further national research related to women’s health. She was a board member of The Ohio State University Alumni Association. Helen also served as a member of the Resource Council during the early development of the Lifelong Learning Institute at Columbus State Community College. Helen mentored others and motivated them to pursue careers in community service, health care, and higher education.

She was an excellent role model for anyone who had the pleasure of knowing her. Helen was the proud recipient of multiple awards, including the highest papal award for a layperson, the Pro-Ecclesiae et Pontifice Medal. Locally, she was inducted into the Central Ohio Senior Citizens Hall of Fame in 2007.

Helen had an interest in art (making her own Christmas cards for nearly 20 years), music, playing bridge, and traveling. Her excursions took her to Ireland, Eastern Europe, and throughout the United States.

Helen enjoyed the company of many friends as well as spending time with her nephews and nieces, and their families. She was an active member in her parish of St. Mary Magdalene.

Helen was the youngest of four children (one sister, two brothers). They were raised in the home on Derrer Road, which is now on the Hilltop Historic Register. She was proud to be part of the Westgate community. She would say that she lived a charmed life and enjoyed people. As the years passed by, she just wanted to be known as a social worker. Helen wanted to make a difference and she did. Her life was about her love for people and her Irish wit and humor.