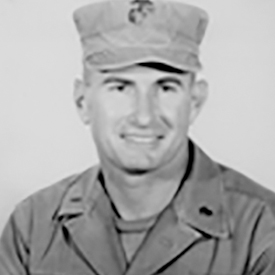 After graduating, on Labor Day in 1950, his unit, which had been activated, left for Camp Pendleton, California and then on to Korea and he was wounded at the Chosin Reservoir by simultaneous mortar shell and grenade explosions and returned after two years in Korea to Columbus. He then joined the Columbus Police Force on April 13, 1955. His last assignment was with the training academy, teaching riot control methods and writing a training manual on riot control.

He remained a member of the Marine Corps Reserve and took a two-year military leave in April, 1966 to serve in the Active Marine Corps as Chief Warrant Officer. After retraining at Camp Le Jeune, N.C. and Guantanamo Bay Nava Base, he went to Vietnam. He was sent to Okinawa for specialized training, then returned to Vietnam in command of a mortar platoon.

On September 10, 1967, while commanding the 81mm Mortar Platoon in the 26th Marines, Chief Warrant Officer Holycross was killed from fragments of an enemy rocket near Con Thien leading his men against the North Vietnamese Army.

He had jumped from his position of cover and ran from hole to hole checking his men, with complete disregard for his own safety and was exposed to enemy fire constantly. This heroic action prevented many marine casualties.

At his funeral in Columbus, it was said: “Dick was a humanitarian. There were things going on in the world that involve people and how they’re to live, and he had to take a part in things.” “He seemed to have some sense of accountability and was unable to just drift or let things go.”

Dick is survived by his widow, Donna, a daughter, LeAnn, and two grandsons, Drew and Michael, who all reside in Florida. On August 20 of this year, Dick and Donna would have been married for 50 years. Dick honored his school, his community, and his country. No man could ever do more than to sacrifice his life for others.