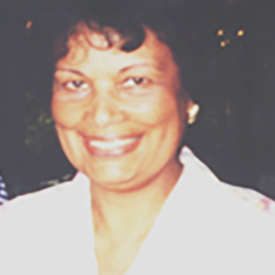 Joan attended Highland Avenue School, West Junior and Senior High. At West, she was a member of the National Honor Society for three years, the “L” Society, Student Council, Room President, Library Counselor, Office Monitor, and Study Hall Monitor among many other activities. She graduated from Radcliffe College where she was elected Secretary of the Senior Class in 1952.

She met and married Jim Reppert – she was an undergraduate English Major at Harvard, and he was a Harvard graduate assistant teaching a Chaucer course and working on his Ph.D. During that era, it was a bold thing indeed for them to establish an interracial relationship. Their marriage in 1952 was still regarded as illegal in 17 states, but they were married for 50 years, raised six children and five of them became members of the National Honor Society in their schools.

Jim passed away in 2002. Joan continues to reside in Reading, Pennsylvania. She was employed by Social Services for Berks County Head Start, was Education Program Director

for the former YWCA of Reading- Berks, and was Executive Director of the Reading-Berks Human Relations Council for 17 and one-half years.

She served over a decade on the boards of the Family Guidance Center, Red Cross, Head Start Policy Council, Keystone Association of Human Rights, Berks Community Action Program, was a former YWCA Board President, the first female Governor of the Police Athletic League, Chairman of the Reading area Community College Developmental Studies Program.

She was recognized for leadership by the Altrusa Club of Reading and the Washington Presbyterian Church, received the Pennsylvania Education Association Leadership Award for work in the World of Difference Program in Schools, recognized by Head Start and upon retirement was presented with a Proclamation by the Senate of Pennsylvania and the City of Reading.