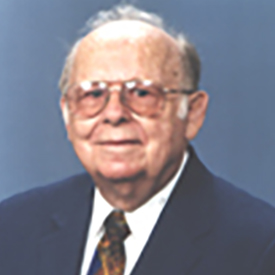 Robert attended West Broad Elementary and West Junior High and Senior High School, where he was Senior Class President. He enrolled at Ohio Wesleyan University in 1941 in pre-medicine. In early 1943, he rejected an educational deferment to enter military service. He served in the U.S. Navy from 1943 to 1946. Following his discharge he enrolled at The Ohio State University where he earned a BA degree in 1948. He then entered the OSU College of Medicine where he was President of the Senior Medical Class and graduated in June, 1952.

In 1953, after completing his residency at Mt Carmel, Dr. Sinclair opened a private practice at 3191 West Broad St. He had privileges at Mt. Carmel, St. Anthony’s, Children’s and Columbus State Hospitals. He was also a company doctor for Westinghouse Electric Corporation and served as Assistant Zone Chief for Civil Defense in West Columbus from 1954 to 1957. In 1957, he moved to Granville and opened an office there where he centered his interest in the medical problems of young adults. He continued this focus over the next thirty-two years. He also became Director of Student Health and Professor of Health Education at Denison University.

For 22 years of his time in the university setting, he served as the athletic physician for all sports at the universities. He served at President of the Ohio College Health Assoc. – 1964; President of the Central College Health Assoc. (Kansas, Missouri, and Nebraska) – 1972; President of the Southern College Health Assoc. (Mississippi, Alabama, Georgia, Florida, South Carolina) – 1986. He was a member of the National Athletic Trainers Assoc. and published nationally on the Problems of Heat Injuries in Athletics. In 1980, he moved to Tuscaloosa, Alabama to become Director-Professor of the Russell Student Health Center and University Hospital at the University of Alabama. He retired from the University of Alabama and active medical practice in 1988. His biography was published in Moore’s “Who is Who in Ohio”, Who’s Who in the Midwest”, “Men of Achievement”, “Who is Who in Health Care”, “Notable Americans”, “Who’s Who in the South and Southwest”, Who’s Who in the World”, and “Who’s Who in Medicine and Health Care.”

He was a member of Kiwanis and Rotary International Service Clubs on Ohio, Kansas, and Alabama. From age 15, when he became a member of the American Federation of Musicians, he performed professionally as a drummer in big bands and jazz groups in central Ohio, Chicago, Kansas, and Alabama. Dr. Sinclair resides in Tuscaloosa, Alabama with his wife of 58 years, Mary Underwood Sinclair ‘42, and they have two married daughters, five grandchildren, and one great grandchild.

UPDATE: Dr. Sinclair passed away November 30, 2017 in Olathe, Kansas as the age of 93. For the last 24 years of his life he performed with the Dixie Downbeats, a 7-piece Dixieland jazz band. His wife, Mary, died around 2006. They had been married for 69 years at the time of her death. By 2017 he had three great grandchildren. After having lived in several places over his lifetime, his family returned Dr. Sinclair to Columbus to have his funeral at Schoedinger Funeral Home on W. Broad St. He was interred at Green Lawn Cemetery.