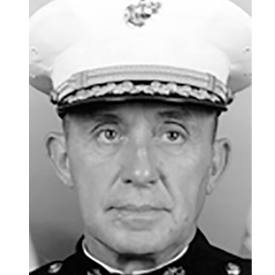 Following graduation, Richard Carey enlisted in the Navy V-5 (Navel Aviator) Program. With the war ending, the program closed and he opted for a discharge. However, in August 1946 he and six other classmates enlisted in the Marine Corps.

That began a long and very significant military career for Richard Carey. He received 28 personal decorations. His Commands included four as 2nd Lt, one as 1st Lt, two as Captain, one as Major, three as Lt. Colonel, one as Colonel, one as Major General, and one as Lt. General.

He is qualified to fly 37 different types of aircraft. Significant operations he was involved in: Korea, the Cuban Missile Crisis, the Lebanon Crisis, the Dominican Republic Crisis/Revolution, Viet Nam, the evacuation of Phon Penh and Saigon, and the recapture of the pirated ship Mayaguez.

Career highlights: In 1948 he was selected for the Meritorious NCO program for promotion to 2nd Lt. When the Korean War started he landed in the first wave of the Inchon Invasion and participated in the recapture of Seoul. In 1951 he attended Flight Training School. He went to Naval War College, after which he was assigned to the First Marine Aircraft Wing in Japan where he was the Assistant Wing Operations Officer.

Just prior to the TET offensive in 1968 he was assigned as the Wing Operations Officer where he planned, coordinated, and conducted all sorties in support of two Marine Divisions. He was transferred to Headquarters, Marine Corps in Washington, D.C. as the Aviation Logistics Officer. While there he decided to retire, but reconsidered after being assured he would be assigned to the Boot Strap program to complete his college degree.

He received the Defense Superior Service Medal for coordinating the rescue of a B52 crew during a typhoon and for his efforts in the Viet Nam POW return. Richard was assigned as Commanding General, Ninth Marine Amphibious Brigade, where he planned, coordinated, and executed the evacuation of Phon Penh, Cambodia, and Saigon Viet Nam in 1975. Over 6,000 by air and 40,000 by sea were evacuated and is unprecedented. For this action he received his second Legion of Merit. Promoted to Major General in 1976 and Lt. General in 1980.

He was the Commanding General, Marine Corps Development and Education Command. Responsible for Doctrine Coordination and Training Development with all other services. He administered a reservation of 66,000 acres, administered all schools, and developed 23 new schools for Marine training. He also conceived and developed an anti-drug abuse program for the Marine Corps which became the prototype for Anti-Drug abuse for all services.

Upon retiring in 1983, Richard received the Distinguished Service Medal. Since retiring he has been a member of the State of Ohio Governor’s Cabinet; an International Airport Administrator; the Director, Development Corporation Administrator, of the 38 Dallas District Courts; and a security consultant.