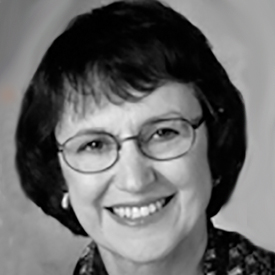 Following her junior year at Miami University, Kay Glass took a week from her summer job to help her parents sell Sno-Kones at the Auglaize County Fair. It was just another August for her father, Rufus Glass, long-time West teacher and coach, and her mother Erma, an elementary music teacher. For Kay the week at Wapakoneta was a life-changing event. She met Allen Jackson, the State Fair Inspector and OSU medical student from Bryan, Ohio. The next year they were both selling Sno-Kones in Wapakoneta and married a week later.

Kay taught fourth grade in Upper Arlington until their first son was born. A year later the Jacksons moved to Bryan where Allen practiced medicine and their 2nd son and a daughter were born. During this time Kay served as President of Women’s Welcome Club, Claire Newcomer Club, and the Bryan Civic League. When they returned to Columbus for Allen’s pediatric residency, Kay joined the preschool staff at First Community Church where she developed an interest in early childhood education.

When they moved back to Bryan, where she continued that interest and became a team teacher and co-director of the county Head Start Program. They raised money to equip the center and recruited volunteer mentors and classroom aides. During their five years, Kay and a friend wrote the teaching manual for the Northwest Ohio Head Start Centers.

Much of her time was spent supporting her children’s activities, especially the Bryan Swim Team. All three children were swimmers so she joined other families to rejuvenate the summer swim team. Kay served on the swim team board as treasurer, publicity, records chairperson, and on the bingo crew. The program grew to include more than a hundred competitive swimmers.

When an opportunity surfaced, Kay became the Deputy Registrar of the Williams County License Bureau. She ran the business for eleven years. After retiring, Kay proposed to two friends that they start a women’s investment club. Now in its fifth year, the group has seventeen of the original members. Kay’s other commitment is to the multimillion dollar Bryan Area Foundation, where she is a trustee and on the grant making committee.

In 1999 she chaired the search committee to hire the group’s first executive director. She is an advocate for community foundations and the important role they play in improving the quality of life for those who give and receive its funds. This past January Bryan honored Kay with the Athena Award, given to someone who has advanced leadership opportunities for women.

Sue’s siblings are West alumni Sue Glass Goodrich ‘50, Hilliard, OH and Dick ‘57, and his wife Sharon Younkin Glass ‘59, Walnut Creek, CA. Sue and Allen are the parents of Dan, a VP of the Evenflo Co. in Troy, OH; John, an attorney in Ottawa, OH and owner of the Hamler AirTec Company; and Jane, an attorney who currently stays home with her young children. Kay and Allen have a condo in Columbus, which they visit weekly, but Kay can’t imagine a more overall satisfying place to live than Bryan.