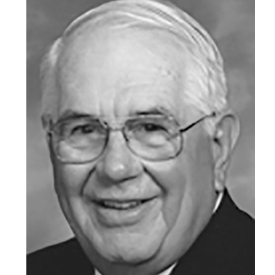 Richard Slager received his medical degree from The Ohio State University. While there he played quarterback for three years while winning varsity recognition in both football and tennis.

Upon receiving his medical degree he served in the Navy during the Korean Conflict, finishing his medical career as a Commander in the Navy Reserve. After his military career he served the Columbus community as an Orthopedic Surgeon. While practicing at Mt. Carmel, Children’s, and University Hospitals he assisted numerous West High graduates.

He has served as Chief of Staff of the Mt. Carmel Medical Center, bulletin editor for the American Academy of Orthopedic Surgeons, and state chairman of sports medicine for the Ohio State Medical Association. He has also been an officer with Ohio Orthopedic Surgeons and Sports Medicine and is a member of the Board of Trustees of Rio Grande University.

Dr. Slager has a long list of giving to others. He has received the Service Above Self Award from Rotary International. He has served Rotary as President of the Upper Arlington Club, District Governor, and worldwide as International District Governor and International Vice President. The Service Above Self Award resulted from such contributions as organizing, participating, and completing efforts for drilling wells and providing clean drinking water and for

providing thousands of dollars worth of medical equipment and support to Central America. He also contributed personally by going to Central Africa to provide free surgery and medical care. His patients in that area have now done away with crutches and can walk due to his surgery and concern.

Current involvement is in heading the Rotary International efforts in funding for the worldwide elimination of polio. He is the Rotary funds chairperson in a combined effort to raise $400,000,000 toward the eradication of polio worldwide by the year 2005. This worldwide program has been an effort that Richard has been very committed to and which takes considerable effort and time to direct. He continues in delegations meetings with members of Congress in Washington and the United Nations in New York on these issues.

While Vice President, he represented Rotary International worldwide in presentations to dignitaries such as the King of Jordan. Richard’s one sibling, Jim, is a January ‘48 West alumni. Richard Slager lives in Columbus.