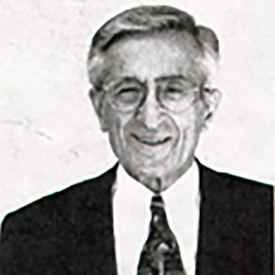 Joe Caligiuri graduated from The Ohio State University with a BS and MS in Electrical Engineering. After graduation he accepted a position with the Sperry Gyroscope Company in Long Island, NY.
At Sperry he was the chief engineer for Inertial Navigation and Anti-submarine Warfare Systems.

In 1969 he accepted a position as VP of Engineering of the Guidance and Control Systems Division of Litton Industries in Thousand Oaks, CA. Joe’s wife, Barbara DeLaney Caligiuri, whom he married in 1948, and their four sons made the move west. In 1971 he was named president of the division, in 1974 promoted to corporate VP, in 1977 senior VP, and in 1981 executive VP. Joe retired from Litton Industries in 1992 as Corporate VP and Group Executive of the Advanced Electronics Systems Group.

His extensive career in the field of inertial navigation and control systems includes directing Guidance and Control’s development and production of advanced systems for foreign and domestic military aircraft and missiles, for naval ship control systems, for electronic spacecraft systems, and for other airborne and shipboard applications.

He remains active doing limited consulting and serving on the boards of directors of Titan Corporation and Intracel Corporation. He has served on the Boards of Avnet Inc., Parks Jaggers, Scriptel Holding, Source Scientific, and Sierra Semiconductor.

He was a member of the U. S. Postal Service Technology Advisory Board and has served on a steering committee of UNESCO. He was also the chairman of the Franchise Advisory Board of the City of Thousand Oaks, CA.

Joe is a member of three national honor societies: Eta Kappa Nu, Phi Mu Epsilon, and Tau Beta Pi. He received the Distinguished Alumnus Award from The Ohio State University in 1979. He is a member of the Institute of Electrical & Electronics Engineers, the American Institute of Aeronautics & Astronautics, and has served on numerous boards and committees of the American Defense Preparedness Association and the National Security Industrial Association. He was also the national president of the Association of the Unites States Army and the Chairman of the Board of the National Security Industrial Association.

Joe’s wife, Barbara, passed away in 1996. Their four sons all live in Southern California with their families. Joe has five granddaughters and five grandsons.

In 1998 he married Tanya Condon. Together they keep busy with charity work, travel, and Joe’s continued work involvement.