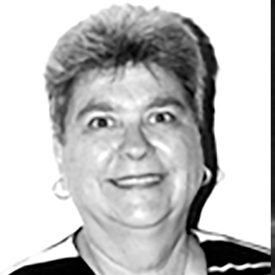 Lois Hunter Neff is a life-long Hilltop resident. She has been the Executive Assistant at the Greater Hilltop Community Development Corporation for the past six years.

A life-long member of Concordia Lutheran Church, in Lincoln Village, she was the first woman elected to the Church Council there. She has been the church organist at Concordia since 1983 and the Saturday Mass organist at St. Margaret of Cortona Catholic Church since 1988.

A partial list of the activities Lois has been involved with include: columnist since 1985 for the Westside Messenger “Our Pictorial Past”; 1987 president of the Hilltop Business Association and executive secretary from 1988 to 1993; member of the Hilltop Historical Society since 1986, president in 1993, currently serving as historian; one of the first elected members of the Greater Hilltop Area Commission, Secretary from 1981 to 1987; founding board member of the Greater Hilltop Community Development Corporation in 1987; founding member of the West High School Alumni Association, editor of the Alumni Newsletter from 1992 to 2000; piano accompanist for the Greater Hilltop Community Theater 1993-1995 and 1998 to the present, currently serving as secretary; co-chair for the 1996 Olympic Torch Relay for the Hilltop community and instrumental in getting the torch carried past Jesse Owens’ Oakley Ave. home during the 1936 Olympic Games; chosen as a

She has played piano for many West singers and dancers, perhaps most notably entertainer Nancy Wilson ‘54. She met her husband, Carl “Joe” Neff ‘54, at a West/Central football game when Lois was in the 8th grade. Now married 44 years, they have five children, two who are also West graduates. Mitch ‘76 (Julie), Stacy Neff Berndsen ‘78, Christine Neff Robbins (Tracy), Corry Neff Rausch (Clark), and Joe. Chris, Corry, and Joe are Bishop Ready Alumni. The Neffs have six grandchildren.

Update: Lois passed away March 16, 2016 after a brief illness and hospital stay. She was predeceased by her husband, Joe. Lois was a long-time advocate for the Hilltop, Westside, and West High School. She was on the Alumni Association Board for several years. Her volunterism will be greatly missed.