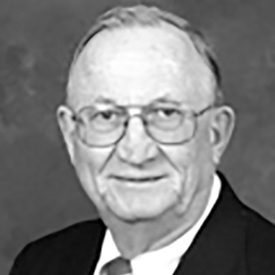 Following graduation, Jerry was employed by the New York Central Railroad where he served a Car Inspector’s apprenticeship. During this time he attended Franklin University. He joined the accounting department at Janitrol Heating and Air Conditioning, leaving eleven years later as their Accounting Manager.

Following Janitrol he was employed as Controller of the Buckeye Plastics Division of Buckeye International. He was a member of the United States Naval Reserve for twelve years, serving as an instructor of Diesel Engines, attaining the rank of Petty Officer First Class.

In 1973 he moved to Troy, New York, where he joined Garden Way Manufacturing Company as their Accounting Manager and Controller, retiring in 1995. He became a Board Member of the Columbus, Albany, and Burlington Chapters of the National Association of Accountants and is currently an Emeritus Life Member. He was appointed to the Board of Directors of the Clifton Park, NY Water Authority serving as Board Member and Chairman. He served six years on the boards of the Troy, NY Chamber of Commerce and the United Way. Jerry has been affiliated with the Red Cross for forty-eight years.

He first became associated with the American Red Cross Volunteer Blood Program in Columbus during the 1950s, and he has served in Ohio, New York, and Vermont.

Following retirement he became a Red Cross Disaster Volunteer serving in disaster relief operations which frequently take him throughout the United States and its territories. He served as a member of New York Congressman G. B. Solomon’s Service Academy Selection Committee. He also served as member and Chairman of the Board for the Eddy Geriatric Center in Troy, NY. A member of the Rotary International in NY, Vermont, and Ohio, he has been recognized as a Paul Harris Fellow.

Jerry is a volunteer of the Columbus Meals on Wheels program, and he is an active member, youth advisor, and Deacon of the Mifflin Presbyterian Church in Gahanna, Ohio where he lives with his wife Carol. They have six children, thirteen grand-children, and two great-grandchildren.