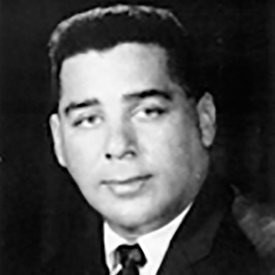 In newspaper articles at his death in 1982, at the age of 51, Jack Gibbs was described as “a dynamic public school administrator and outspoken promoter for a Columbus indoor sports arena, a man of great energy and great concern, and a man whose energy and concern were dedicated toward his community and particularly its young people.” And, from Columbus Schools Superintendent Joe Davis, “He spent his life finding kids to help and then moving heaven and earth to get that help.”

At his death he was the executive director of the Columbus Ft. Hayes Career Center. He was the first black high school principal in Columbus, serving at East High School from 1967 to 1971. After graduating, Jack attended The Ohio State University where is was a fullback on the football team that won the Rose Bowl in 1955.

After graduating from OSU, he taught history and coached football at Central High School, then served as vice principal at Franklin Junior High. He was a trustee at OSU. His lifelong interest in sports made him a leading proponent of a city sports arena. Governor Rhodes called him “a top administrator and a man with unusual executive ability in handling the complex affairs of secondary education.”

In a October 7, 2000 article touting the new National Hockey League team, the Columbus Blue Jackets , The Columbus Dispatch said, “The first man to press for change was Jack Gibbs, a career educator and civic activist who in the 1970s began advocating a Downtown arena. Gibbs single-handedly led a petition drive to place a bond issue on the June 1978 ballot. Two years later, Gibbs joined others in promoting a city income-tax increase to build a civic coliseum. . . . “

Although Gibbs died, his dream didn’t. On October 7, 2000 sports history was made in Columbus when the Columbus Blue Jackets played their first regular season game in the Nationwide Arena in Downtown Columbus!

In 1972 he took over as executive director of the Metropolitan Career Center and oversaw the development of what was later known as the Ft. Hayes Career Center, which was said to be his dream and legacy. He envisioned a four-year comprehensive school for the performing and fine arts which would draw students from the suburbs. At the time of his death, students from Upper Arlington, Westerville, Worthington, Grandview Heights, and Columbus attended Ft. Hayes. His strong suit was his ability to seek private money to accomplish a variety of projects at Fort Hayes, and he obtained a $603,000 grant from the Battelle Memorial Institute Foundation to start the Battelle Youth Sciences Program for gifted math and science students. He was a member of the Board of Trustee of Battelle Commons.

Jack’s widow, Ruth Ann Gibbs, lives in Westerville, his daughter Cheryl Parker lives in Blacklick, and his son, Jack Gibbs, Jr., an attorney, lives in Columbus. There are five grandchildren.

Update: March 2013 – Jack Gibbs grandson, also named Jack Gibbs, was named the “Gatorade Ohio boys basketball player of the year.” He is a senior at Westerville North High School. The award recognizes athletic excellence, academic achievement, and exemplary character. He averaged 16.8 points, 4.8 steals, 4.1 assists, and 3.2 rebounds. He has signed with Davidson College. Apparently the younger Gibbs has followed in his. athletic grandfather’s footsteps!