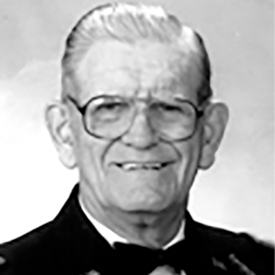 The delay was due to his volunteering for military service in 1942, where he attained the position of First Sergeant. He was tendered a Direct Commission to 2nd Lieutenant while serving in Europe during WWII. His speciality was Combat Graves Registration Operations.

In 1951 he volunteered for Airborne duty and became an Army Paratrooper. He received many awards, but the one he most cherishes is the public statement and entry in his records by the Assistant Division Commander, 82nd Airborne Division. At the conclusion of the Dominican Republic Combat Operation, the General stated that Butte was one of the most outstanding Lt. Colonels in the entire Division.

Col. Butte has been honored with national TV exposure on two occasions. While in command at the US Military Cemetery at Nettuno, Italy, he taught cemetery workers how to play baseball and is regarded as the Father of Baseball in Italy.

In 1983, Harry Reasoner, on 60 Minutes, aired a segment on baseball in Italy and referred to Col. Butte as the “Abner Doubleday of Baseball” in Italy. In June 1984, Pierre Salinger, on ABC France, interviewed Col. Butte for his work in Graves Registration during the invasion of Normandy and recorded his activities during the 40th Anniversary of the Invasion. The segment was aired throughout the world during their 40th D-Day Anniversary TV presentation.

While stationed in Frankfurt, Germany in 1962, Col. Butte was credited with saving the life of a German school girl who had been injured by a “hit and run” driver, administering first aid until emergency personnel arrived.

Col. Butte has been researching and writing about WWII and Korean Quartermaster Graves Registration Companies, and he is considered a specialist in this field of history.

He was at Roosevelt (Columbus) Junior High School from August 1968 until 1980 as a Social Studies teacher, Guidance Counselor, and then Move Ahead teacher.

For five years during the late 80s and early 90s he volunteered his services at the Veterans Administration Clinic in Riviera Beach, FL. where he and his wife, Velma, live. They have one son, Charles Butte II. Charles considers himself an outstanding emissary for the values and goals of the students of West High School.

Update 2008: Dear friends, on 16 May 2008, I was twice honored by the Quartermaster Corps; first I was voted into the Quartermaster Hall Of Fame, second I was presented with The Ancient Order of Saint Martin, the patron saint of the Corps. 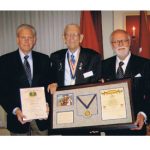 The picture is of the Awards, with my son Chuck on the left and my nephew Fritz on the right (as you view the picture). When they were getting ready to make the awards, they wanted all three of us to come forward. The secretary asked my nephew how we should be introduced. He said that was easy, we are all named Charles. The secretary and the audience, of about 300, got a big kick out of that.
Sincerely, Bud Butte