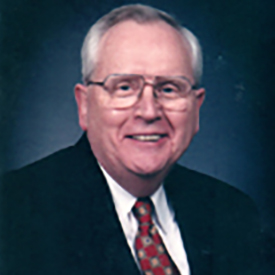 John was born in Columbus, Ohio in 1935 and lived on the Hilltop until his 22nd birthday, the day he married Pollie Wright (Class of 1953). He attended West Broad Street Elementary School, West Junior High School, and graduated from West High School in the June class of 1953 where he served as President.

He was awarded two degrees from The Ohio State University – a Bachelor of Arts in theatre arts in 1957 and a Master of Arts in broadcast management in 1966.

As a product of a family of newspaper journalists, his interest in communications led to his participation in a Columbus Public Schools high school radio workshop. At the age of 16, he was employed by WTVN-TV (now WSYX-TV) in Columbus in a variety of on-air and production assignments while completing high school and undergraduate studies at Ohio State. While still in undergraduate school, he joined the staff of the new television station at Ohio State, WOSU-TV, as a producer-director and later as head of production.

Following graduation from The Ohio State University, he was commissioned as a 2nd Lt. in the U.S. Army Reserve in June of 1957. Also in June, he married Pollie Wright. John completed a tour of active military duty and continued reserve service until honorably discharged as a Captain, U.S. Army Artillery.

Mr. Morison’s professional broadcast career covered a period of 50 years from Columbus to West Virginia University; to Boston, Massachusetts; to the University of Maine; and to Norfolk, Virginia in 1975. These opportunities led from engagement in the creation of television programming, to management of programming services, to senior management of a state-wide public television and radio network, to a major community non-profit public broadcasting and telecommunications organization.

His first retirement was in 2001, but was interrupted by a persuasive case made by respected community leaders to come out of retirement for two years, so he could serve as Interim Executive Director of the Virginia Symphony Orchestra. They knew John could help stabilize a fragile financial situation, while a nationwide search for an experienced and qualified orchestra manager could be recruited. Mr. Morison finally retired in 2004 to his home in Virginia Beach, Virginia.

During his professional public broadcasting career, he was elected by his peers to serve on the board of directors of National Public Radio (NPR), The Public Broadcasting Service (PBS), and Chair the board of the Virginia Public Television Stations. He served on a variety of community boards in civic volunteer capacities, serving the interests of the business, human relations, and cultural communities.

John has received a number of lifetime honors and recognitions for his years of service in a continually changing communications industry including: The National Academy of Television Arts and Sciences Silver Circle Award; the 21st Century Award of America’s Public Television Stations; the Humanitarian Award of the National Conference of Christians and Jews (NCCJ); the Alli Award of the Cultural Alliance of Greater Hampton Roads; the Community Service Award of Old Dominion University; the Pioneer Award of the Hampton Roads Educational Telecommunications Association (WHRO); commendation on retirement from area public school divisions; and a joint resolution of the Senate and House of the Virginia General Assembly for service to the Commonwealth of Virginia.

Mr. Morison is an elder and Trustee of King’s Grant Presbyterian Church in Virginia Beach, Virginia, where he and his wife, Pollie, a graduate of West High School and Virginia Wesleyan College, live. They have a daughter, Brenda Morison Stone, two grandchildren: Jennifer Stone Norris in the U.S. Air Force, and Nicholas Stone, a college student in Virginia Beach. John and Pollie have two great grandchildren and a third is expected in late September. They continue to be actively involved in their church and their enjoyment of the cultural life of their community.