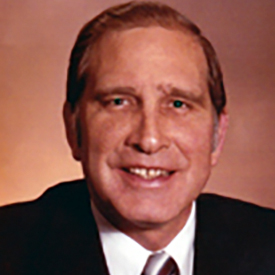 While at West, Ted Johnson was an excellent student, leader, and athlete. He was selected to the All-City Football Team his senior year. In addition, he received the Agonis Award for outstanding scholar-athlete. Ted graduated from West in 1952. He attended Capital University on a full scholarship and played football. He was married to his high school sweetheart, Nyla Grabill, class of 1953.

Ted accepted a job with Gustav Hirsch International Electrical Contracting Company. He found himself traveling worldwide as this company was responsible for major communication projects for the United States government. He spent a considerable amount of time supervising projects in Southeast Asia during the Vietnam conflict. When Ted was at home on the Hilltop, he was an active member of the Hilltop Kiwanis and the Hilltop Community Council.

Ted grew tired of being away from his growing family, so he decided to take a position with another electrical company located in Carmel, Indiana. This move, in 1971, proved to be a permanent move for his family. Ted eventually purchased the Schaeffer Electrical Company. His company developed the initial electrical construction for the Contemporary Hotel, the Polynesian Resort Hotel, and the Monorail system at Walk Disney World in Orlando, Florida.

Ted was elected to the Carmel City Council in 1980 and served in that capacity to 1990. In 1992, Ted was elected Major of Carmel and served to 1995. His vision and progressive planning in the areas of roads, sewage, water treatment facilities, pension plans for fire fighters and police, as well as community facilities provided the solid ground work for the growing city of Carmel. Ted was very passionate about bringing the community together, so his idea of a community gazebo was realized. This ‘Minnie Doane Gazebo” remains the focal point for social gatherings and entertainment.

Ted enjoyed going to local schools and talking to students about the three branches of government using a ‘milking stool’ with three legs for comparison. Through his church, he traveled on a mission to Liberia in Africa for the purpose of building a school.

Despite his busy schedule, he always had time for his wife and five children. They were also blessed with nine grandchildren.

Ted died from a massive heart attack in 1998.