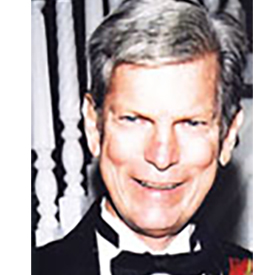 James Thomas Alexander was born in Columbus, Ohio, on August 4, 1948, the son of Harold and Jean Alexander and the grandson of James and Louise (Becky) Harkins, all of Columbus.
Jim attended West Mound Elementary School, Hilltonia Junior High School and was also active in the local Boy Scouts and American Legion baseball. He graduated from West High School where he played on the varsity football team and served as his Senior class president.
After high school, he first attended Wittenburg and then Capital University, where again he played on both the varsity baseball and football teams. He graduated from Capital in 1970.
Jim attended the College of Osteopathic Medicine and Surgery in Des Moines, Iowa, graduating first in his class in 1974. He served his internship at Doctors Hospital (West and North) in Columbus, Ohio. He practiced Family Practice medicine for five years in Florida and Ohio, before serving 20 years in the United States Navy.
His initial assignment in the Navy was at the Marine Corps Base at Quantico, Virginia, where he served as the Head of Military Medicine and the Head of the Department of Family Practice. While at Quantico, he also had the honor of serving as the Aviation Medical Officer to HMX-1, the Presidential Helicopter Squadron, including the responsibility of coordinating medical contingency plans for the President of the United States and providing direct medical care, if necessary and appropriate.
After this initial assignment, Jim attended the University of Cincinnati and Kettering Institute in Cincinnati, Ohio, where he completed a residency in Occupational Medicine and obtained a Master of Science degree. At his next military duty station, Jim served as the Head of the Department of Occupational Health and Preventive Medicine, Naval Hospital, Charleston, South Carolina. In this position, he developed medical surveillance programs, conducted Health Hazard Evaluation and managed multiple occupational health programs, including Asbestos Medical Surveillance, Respiratory Protection, Industrial Hygiene Surveys, Environmental Health and Hearing Conservation.
His next assignment took him to Washington, D.C., where he served as Director of Occupational Health at the Naval Medical Command. His duties here included directing the worldwide Navy Occupational Health Program for the largest industrial complex in the world. He developed policy, ensured implementation and provided quality assurance for the occupational and environmental programs.
He then served at the Uniformed Services University of Health Sciences, first as Director, Division of Environmental and Occupational Health, Department of Preventive Medicine, then as the Director of the Occupational Medicine Residency. Activities in these assignments included developing and implementing teaching programs and practicum phases of training, and developing and implementing environmental health research.
In his subsequent position, he served briefly as the Director of the Office of Physician Professional Development, where he provided guidance for career development to more than 5,000 Navy physicians. Following that, he was a physician inspector for the Navy Medical Department Inspector General, reviewing all aspects of medical care provided at Navy worldwide Medical and Dental Treatment Facilities, traveling extensively to inspect these facilities. Jim continued his career as the Director of the Office of Continuing Medical Education, where he supervised and implemented the Navy program to ensure appropriate accreditation for more than 1,400 programs annually.

His next two assignments moved him into the area of medical research, serving first as the Director of the Office of Clinical Research (Investigation) where he directed Navy-sponsored or conducted Clinical Investigation human use and animal use research studies worldwide. In his final military position, he served as Director of the Office of Human Subjects Research, Medical Research and Development. In both of these positions he worked with validating scientific integrity, assuring appropriate ethical review, providing medical monitoring and quality assurance, supervising manuscript review and acting as final authority over 900-1,000 major research studies worldwide. He also served as an active liaison with all Navy research laboratories, the Federal Drug Administration, the National Institutes of Health, other federal agencies, public and private academic institutions, pharmaceutical companies and other health care institutions to coordinate cooperative research development programs and ensure protocol implementation and completion.
During his naval career, Jim was awarded the National Defense Service Medal, the Navy Achievement Medal, and the Meritorious Service Medal. After retiring from the Navy at the rank of Captain, he served as the Medical Director of Banner Health Research Institute in Phoenix, Arizona, where he provided direction and oversight of all compliance and development of research activities for a fourteen-state health care system. He served as the primary point of contact for all applicable Federal agencies, as well as other public and private agencies and institutions.
Jim was Board Certified by the American Board of Preventive Medicine (Occupational Medicine), the American Osteopathic Board of Preventive Medicine (Occupation/Environmental Medicine) and the American Osteopathic Board of Family Practice. He was also a Diplomat of the National Osteopathic Board of Medical Examiners. Additionally, he was a Fellow of three colleges: the American College of Preventive Medicine, the American College of Occupational and Environmental Medicine, and the American Osteopathic College of Occupational and Preventive Medicine. He was active in medical organizations of which he was a mentor. He served as the Secretary/Treasurer and Executive Director of the American Osteopathic Board of Preventive Medicine, and as a representative of this board to the Board of Osteopathic Specialists of the American Osteopathic Association. He also served as the Chairman of the Education Evaluating Committee and representative of the American Osteopathic Association’s Committee on Post-Doctoral Training for the American Osteopathic College of Occupational and Preventive Medicine.
Jim passed away December 17, 2005, in Glendale, Arizona, where he lived. He is survived by his wife of 31 years, Carole Nicol Alexander, and their two daughters, Heather Alexander Neal (H. Shay Neal) and Erin Alexander Spetrino (Nicholas Spetrino); and his mother-in-law, Betty Geer Nicol, formerly of Marysville, Ohio.
He was buried with full military honors at Arlington National Cemetery in Virginia.