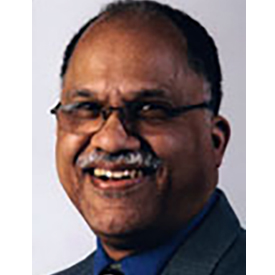 It seems most people spend their adult life building on their high school experiences or fighting against them. Felix Hoover considers himself fortunate to have had West High as the foundation on which to build.
Okay, there were things to fight, as well. But the constructive side far outweighs the other. It helped that he had an older brother, the Rev. Melvin A. Hoover, and cousins who paved the way at West. And he was blessed with supportive parents, Alfred B. and Felicia L. Hoover, who ensured that their sons were active participants in school and community.
Felix thinks of himself as an extroverted introvert who forced himself to seek leadership positions as percussion section leader with the marching band and president of the Hi-Y. He also served as a manager of the track and cross-country teams. While each of these activities carried individual responsibilities, each also fostered teamwork.
A Columbus native, Felix Hoover, 58, thanks the Columbus Public Schools for entrusting him to many fine teachers at Felton Elementary, West Broad Elementary, Westmoor Junior High and West High School. Most of his teachers demanded discipline and excellence. Having English teachers who served a steady diet of composition assignments helped Hoover see the value of writing. They helped prepare him for college – B.A., Communication ‘70; M.A., Journalism, both from The Ohio State University – and for professional life.
In 1969, Hoover began working on the floor crew at WLWC-TV, now WCMH, before receiving and accepting an unexpected invitation the next year from news director Hugh DeMoss to join the news department.
For five years, Hoover worked at Channel 4 as a reporter/photographer/writer and occasional host of public affairs programs. The first year presented a rude introduction because it included the spring quarter rioting at Ohio State.

During the day he attended class, and at night, covered the upheaval. By that time he also had joined the 338th U.S. Army Reserve Band, which trained for emergency guard duty, but wasn’t called to service. He was a percussionist in the band for ten years.
Hoover’s musical background helped him land a position as an assistant with the Columbus Recreation and Parks’ Music in the Air program. He worked on the first Red, White and Boom! Programs and the early Jazz Festivals, which later merged with the annual Rib Fest.
Except for his time with the city, and an earlier stint as an investigator for the Franklin County Public Defender’s office, Hoover has been a journalist. After working for the Call & Post and Omaha Star, both black weeklies, he served nearly 20 years at the Columbus Dispatch covering general assignments, county government, human services and religion. He retired in April. Highlights include his work with five other reporters on the Color Chasm series, which examined racial disparities in health, education and economic status in central Ohio. Hoover’s 10 years with the Faith and Values section reflect his efforts to give a voice to people from diverse segments of the community.
Hoover, a founding member and first treasurer of the Columbus Association of Black Journalists, plans to remain involved with the organization, especially in mentoring high school and college students who want to enter the profession.

We are sad to report that Felix lost his year-long battle with Cancer on May 21, 2013.