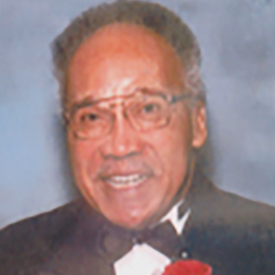 I was born in Northfork, W. Va., and soon after that my parents moved to Columbus, Ohio, to the Hilltop Community.

My formal education began at Highland Elementary School and continued at West High School. My special areas of interest were music, art, sports and science. I was selected as the top scholar athlete (track/football), and was offered an art scholarship to attend Hampton University.
I played tenor saxophone professionally for the Earl Hood Orchestra and Tippie Dyer Orchestra (manager and saxophonist) and was elected to the Jazz Hall of Fame in Columbus, Ohio.
While attending The Ohio State University, I majored in science and had the good fortune to play freshman football under the great Paul Brown.

During World War II, I withdrew from Ohio State and worked at Curtis Wright, Inc. as a chemist. I resumed my education at West Virginia State University, completing undergraduate studies.
I entered Ohio University for graduate studies obtaining a Master of Science from the department of science. I began my government employment (44 years) at NIH and continued my education at George Washington University obtaining a masters and a doctorate.

Prior to working for the Government, I worked as a chemist in the Department of Obstetrics and Gynecology, Ohio State University Hospital. While at the University Hospital, I was recommended to receive a fellowship in Reproductive Physiology at the Worcester Foundation for Experimental Biology, located in Worcester, MA, under the direction of Dr. Gregory Picus, the father of the contraceptive “pill.”

In 1975, my wife, Doris A. Brown and I opened Nature’s Way Children Center, a day care center in Columbia, MD. Since that time we have owned and operated a total of five day care centers. The Maryland State Department of Education certified the Center as a school for the development of cognitive, social, physical and emotional skills for preschool through first grade.

I was an active member of the International Standardization Organization Association for the Advancement of Medical Instrumentation on Irritation and Sensitization; The Standard has been finalized and is therefore used internationally and nationally to test applicable ophthalmic devices.

In 1975, I was one of the organizers of the Graduate Chapter of Omega Psi Phi Fraternity in Columbia, MD, and I was the chapter’s second Basilius. As a life member, I have served the community through many fraternity activities including mentoring young people, offering scholarships to students based on their grades and need, providing programs and activities for the elderly, etc.