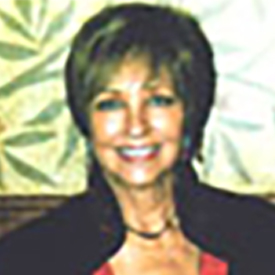 Prepare for Opportunity
A television job was not an option for women in 1962. Following college, a position in the Advertising Department of International Harvester provided Robbie with the opportunity to establish a newspaper and TV division. Robbie was soon writing and producing TV commercials for all of the IH dealers and working with numerous TV stations in the Midwest. It was through those TV contacts that Robbie would take a big step toward reaching her goal.

Turn Setback to Step Up
In 1972, an economic downturn forced IH to close its advertising department. Robbie was out of a job. Because of this setback, Robbie contacted the TV stations she had been working with, inquiring about job opportunities.

Luck: When Preparation Meets Opportunity
In 1972, Robbie interviewed for television positions at two Lansing, Michigan TV stations. One was hosting a live TV cooking show. The other was Advertising Manager. At the Ad Manager interview, Robbie showed her portfolio that included TV experiences. The job interview for Advertising Manager suddenly changed to a job offer of TV News Reporter and Anchor, because of Robbie’s TV background of writing, producing, filming, editing, and on-camera work. It was the dream job Robbie had set as a goal at West High School. Two weeks later in March 1972, Robbie Timmons made her first appearance on TV as a News Anchor, presenting the morning news at 8:25 A.M.. One year later, March 1973, Robbie Timmons became the first female news anchor in the country to anchor the 6 P.M. and 11 P.M. newscasts. Robbie continued anchoring the news for the Lansing TV station until May 1976 when a new opportunity arrived.

Take Advantage of Opportunities
In 1976, Robbie’s assignment was in Washington, D.C. to cover President Gerald Ford’s White House address to national TV News Directors and Station Managers. Robbie was the reporter, as well as the video camera operator. She was also the only woman there. All cameras, and cameramen, were already setup on risers. A White House aide assigned Robbie to an aisle, where she set the camera on a tripod, white-balanced the video camera, and checked the audio. Even though Robbie was in the back of the room, the President’s podium was straight ahead, providing good video. As the President finished his speech, he began walking down the aisle toward Robbie’s location. Robbie realized she would be the only reporter in the room with an opportunity to talk exclusively with the President. She had only seconds to think of something to say that would prompt him to stop to talk to her. Knowing the President had played football at the University of Michigan, Robbie said “Go Blue” as the President approached her. The President not only smiled at the comment, but Robbie got an exclusive interview, which none of the other reporters was able to get. A Detroit TV News Director said he was impressed, and he scheduled an interview with Robbie in Detroit. Three weeks later, Robbie was anchoring the 11 P.M. news for the CBS station in the Top Ten TV market.

Change Can Be Good
In 1982, Robbie made a move to the ABC station in Detroit. Since Robbie began anchoring the 5 P.M. News and then the Noon News, both newscasts have remained Number One in the Detroit market, and Robbie has been honored with recognition and several Emmys. She continues to anchor the Noon and 5 P.M. Newscasts.

Set New Goals
In March 2008, Robbie will see another dream come true and a goal achieved. She has written a children’s chapter book for ages 8-14 about a Thoroughbred racehorse and his best friend, a Goat. Twoey and the Goat will be published during March Reading Month, 2008.

Remember
Remember to keep setting new goals. Strive to be the best you can be and give your best effort to any job. Remember those people who helped you achieve your goals and help others by becoming a mentor. You will always have mentors if you want to keep improving yourself. Don’t get discouraged by rejection…get strength from it…and keep trying and keep improving.

Family
Ron Ranney, WHS 1957, Robbie’s brother, was honored by the City of Columbus for his work with the City’s Building program. Robbie married Sportscaster Jim Brandstatter in 1980. They worked together at the Lansing TV station before going to Detroit TV.