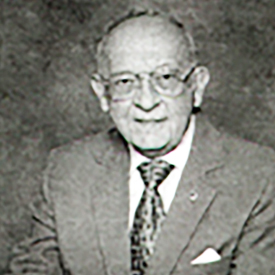 Jack Morris entered The Ohio State University in September, 1941 finishing his freshman year before Uncle Sam came calling. Per Jack, through the luck of the draw he was assigned to a Tank Battalion, which after training in Texas and Louisiana had the dubious honor of landing on Utah Beach in Normandy, France during the invasion against Nazi Germany in June, 1944. J ack served in the Intelligence function for the Battalion.

After the war he returned to OSU and graduated with a B.S. degree in Accounting. Per Jack, his most notable achievement during this period was convincing Harriett Edwards Morris ‘44 to marry him, which they did August 31, 1947 at Glenwood Methodist Church. After graduation Jack worked for Bonney-Floyd Steel Company, as Accounts Receivable manager.

His civilian career was cut short when the Ohio Air National Guard recalled him to active military service for the Korean War. At this point Jack decided to make the military a career, serving a total of thirty-five years active duty which included a tour in Vietnam and twenty years assigned to the Pentagon. During his time in Vietnam he was in charge of determining the enemy threat to all U.S. Air Force and Navy air operations. He attained the rank of senior Colonel in the Air Force and in this capacity served as the Acting Deputy Chief of Staff, Intelligence, and as Commander of the USAF Intelligence Service.

Upon retirement in 1983 the Dept. of Defense, the CIA awarded him the National Intelligence Distinguished Service Medal. After retiring, Jack became an Intelligence consultant to the Defense Industry and was elected President of The National Military Intelligence Association for five years.

Jack is a 55+ year member of the Masonic Lodge, Scottish Rite, and Shrine organizations plus a member of the Lions and Sons of The American Revolution. An Eagle Scout, through his participation in Scout Troop 45 sponsored by West Junior High, Jack spent forty years in Scouting.

He had held many positions within the Methodist church, but none more satisfying than the thirty years spent as a teacher to high school and college students. His hobbies are family, which includes four children, thirteen grandchildren, and five great grandchildren, history, travel, and genealogy.

He and Harriett divide their time between a retirement community in Fredericksburg, VA, and an island-based retreat in Bradenton, FL. Jack adds, he has had the pleasure of co-chairing the West Alumni Association mid-Winter reunion in Florida the last seven years.