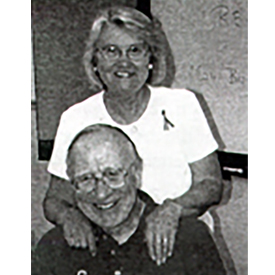 In 1971 he took the position as Pastor of the First Presbyterian Church in Troy, OH. Ed remained in the Army Reserves, transferring from the Transportation Corps to the Chaplains’ Corps in 1963. From 1968 to 1989 he was both the Staff Chaplain, Headquarters, 83rd U.S. Army Reserve Command in Columbus and the Hospital Chaplain, 229st U.S. Army Hospital (1000 bed) in Dayton, OH. In 1977 he was promoted to the rank of Colonel. In 1992 he was honorably retired.

In 1959 Lois accepted the call to serve the Lord along with Ed. She has been ministering ever since. A talented and dedicated person, she has not only been able to thrive as a minister’s wife, which is a 24-hour-a-day endeavor, but she has accomplished numerous undertakings. Lois has been a Sunday School teacher for nearly twenty-seven years at the First Presbyterian Church of Troy, OH. She assisted in Confirmation Classes for many years. She is a Commissioner for the Presbyterian Synod of the Covenant (Ohio and Michigan), a long-time member of the Troy, OH Civil Service Commission, other Troy community activities, and a Ruling Elder in her home church. She also taught and counseled senior high youth at the church for over twenty years.

A gifted speaker, Lois often addresses both small and large groups. After Lois had made a particularly dynamic speech for a large luncheon in Troy for business women and their spouses, one church member was heard to say, “Maybe we hired the wrong preacher!” One person observed, “Although some may say Lois’ accomplishments are more subtle than Ed’s, in all respects they are of infinitely equal value. She is the glue that keeps things all together, and she is the oil that makes things run smoothly. She is Ed’s soul-mate, confident, mediator, and support system, along with being a dedicated mother of their five children and grandmother of six – soon to be eight.”

In 1999, Troy, where Ed and Lois continue to make their home, honored them for their long-time service to their church and community by making them Grand Marshalls of the Troy Strawberry Festival parade. Their children have made homes with their families in Troy, Denver, and the Columbus area. Ed’s father was former Columbus Mayor M. E. “Jack” Sensenbrenner.

Update: The Sensenbrenner’s have moved from Troy to New Albany, north of Columbus, to be closer to family. Then, in March, 2017 Ed was honored by Morehouse College, in Atlanta, GA for his work for Civil Rights in the 1960s. Ed was inducted in to the “Dr. Martin Luther King, Jr. Board of Preachers” in an impressive worship service in the Dr. Martin Luther King Chapel at Morehouse College.