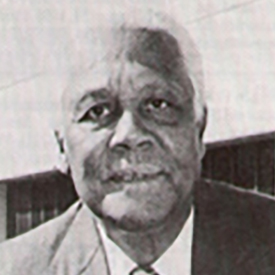 Howard C. “Tubby” Gentry was a prominent athlete who became a successful college coach and administrator. Born on the Hilltop on Oakley Ave., Gentry was one of eight children of James and Della Gentry. James was a former slave and died when Howard was only three years old.

At West High School, Gentry was a model student and a talented football, basketball, and track team member. He was an all-city player while a member of the football team in 1937 and 1938. He longed to play for the Ohio State Buckeyes and joined the Boy Scouts just to be able to sell programs at the OSU football games.

However, upon graduation from West in 1939, Gentry found that he could not become an OSU player because they had already filled their quota of black players. Fortunately, an older brother, Harry, talked him into enrolling at another college, and he was offered an athletic scholarship to play football at Florida A&M. He played tackle there and went on to become an All-Conference and All-America player before graduating in 1943.

After college graduation, Gentry served time in the armed forces and then held coaching jobs at Central State College in Ohio and at North Carolina A&T. He continued to pursue his Masters Degree while coaching.

In 1949 he was hired as an assistant football coach at Tennessee State University. He was named head coach in 1956 and remained until 1961 when he was named the school s athletic director.

Among his accomplishments as coach was in 1956 when he led the Tigers to a National Championship with a 10-0 record and a victory in the Orange Blossom Classic. He was also named the NCAA “Coach of the Year”. In 1959 the team again went undefeated and won another national championship. Gentry served as athletic director from 1961 until retiring in 1976. His son, Howard Gentry Jr., is currently the athletic director at TSU.

In 1980, a TSU sports complex was named in Gentry s honor – the Howard C. Gentry Physical Education, Recreation and Convocation Complex. This arena is used for the university’s basketball games and special events, and seats 10,500.

Howard Gentry died at age 73 on February 14, 1995, following an extended bout with cancer. He was survived by his wife, Carrie, and two children, Howard C. Gentry Jr., Nashville, TN, and Carol Gentry Johnson of Los Angeles.

A brother, Joseph, related how Howard received the nickname “Tubby.” Joseph found a dirty rubber doll named “Tub Tilly” lying in an alley between Oakley and Wheatland Avenues. When he brought it home, his mother told him to get rid of it, so he tossed it out into the yard. Howard, about three years old at the time, picked the doll up and became fond of it. From then on, everyone in the neighborhood asked about “Tubby.”