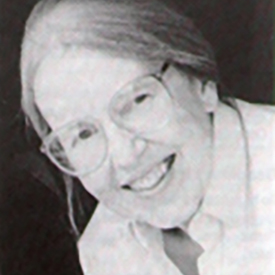 Crawford s parents lived in the Appalachian Hills before moving to Columbus. She began writing poetry when she was five and wrote her first novel when she was ten. Following graduation Annabel received a B.A. from The Ohio State University and a High School Teaching Certificate from Ohio Wesleyan University. She also wrote for the Columbus Citizen-Journal.

Crawford is the recipient of numerous awards and honors, including The Iowa School of Letters Short Fiction Award, 1981, for the story collection “The Phototropic Woman“; The Great Lakes Colleges Association New Writers Award for best fiction of 1982; and the Ernest Hemingway Foundation Special Citation, 1982, both for the above publication. She also received the Greenboro Review Literary Award in 1984 for “Diggory’s Rag,” and the Willa Cather Award in 1994, Helicon Nine Editions, for the short story collection “Knucklebones.”

Many other stories, essays, and poetry have earned accolades for Crawford, some that have been included in the O’Henry Awards Collections and the PEN Short Story Collection. Several stories have been performed at theaters in Chicago and Louisville.

Crawford attributes her unique vision to “growing up with one foot in the modern urban ‘flatlands’ and the other in rural, primitive hill country.” She continues, “I believe the pull of different cultures resulted in a sort of double vision, a feeling of standing outside my own times, looking on from a distance.”

She and her husband, William, a retired Veterinarian, have lived in Ashley, Ohio for 44 years and raised two sons and two daughters. Their house is built of bricks formed of earth dug from the surrounding fields.

During the past twenty years, Annabel has given numerous readings from her works for college groups, high schools, and community organizations. Much of her work has benefited various charity organizations. She had also conducted many writing seminars for college and high school students and adults interested in fiction writing. In early 2002 Annabel had her 4th book, “Stone Man Mountain,” published.