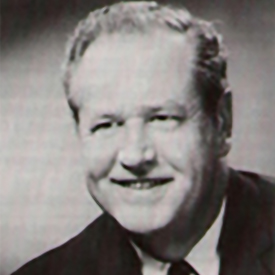 Following graduation, he attended The Ohio State University where he received his B.A. in June, 1939. In June, 1940, he married his high school classmate and sweetheart, Dorotha (Dot) Wiseman ’35 and returned to OSU and received his Education Degree in June, 1941.

His first teaching job in the fall of 1941 was in Shelby, Ohio where he taught Social Studies and coached football. Randall applied for Officer’s Training and received his commission into the United States Navy in October, 1943 during World War II. He served as a Gunnery Officer on merchant vessels in both the Atlantic and Pacific and was discharged in 1946. Their son Stewart was born 1943.

In 1971, Dave taught at the Adult Day High School and retired in 1976. A member of Glenwood U.M. Church, he taught Sunday School most of his life.

A member of the West Gate Masonic Lodge, Randall was also in the Scottish Rite. Randall was diagnosed with cancer in September, 1979, and died on March 24, 1980.

Among the many accomplishments Dave Randall was responsible for at West were: Lighting the tower at night; the Weskets were started under the direction of Band Director Jim Hill; the Marching Band marched in the Rose Bowl Parade (however, the Administration and Board of Education denied Randall from having any part of organizing of the trip); “Doc” Severson performed with the Dance Band at the annual Variety Show; and Astronaut Donn Eisele, a graduate of West, visited the school after his NASA flight.

Dave Randall served at West and Hilltonia during a trying time of racial unrest in the public schools and conducted himself with reserve and dignity. He was very much liked by students at West – both in classroom and on the field. He received many, many letters from former students and was remembered for his humor. A fellow high school classmate, Lloyd Clark, remembers Dave Randall by saying, “He was outgoing and a friend of everyone. His father was a Judge and former member of the Columbus School Board. Dave attracted people around him and had an excellent sense of humor with a gift of knowing when to be serious and settle down. Our yearbook states of Dave – ‘Good nature and good sense, must ever join.'”