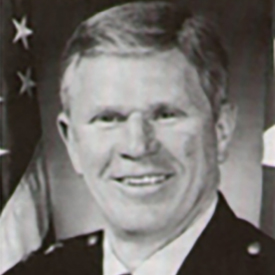 Major General Harry D. Raduege graduated from West in 1965 and then earned his bachelor’s degree from Capital University in 1970. He entered the Air Force in 1970 through the Air Force Reserve Officer Training Corps program at Capital.

In 1976, he earned a master s degree from Troy State University in Montgomery, Alabama, and a second masters degree in telecommunications in 1978 from the University of Southern Mississippi, Long Beach.

He has worked in the communications computer systems area his entire career, serving in operations, maintenance, engineering, plans, budgeting and readiness positions at every organizational level, from detachment through major command.

On June 7, 2000 Major General Raduege received his 3rd star and was promoted to Lt. Gen. He and his family have moved to Washington D.C. where he is now the director of the Defense Information Systems Agency (DISA). Prior to his current assignment he was the director of command control systems, Headquarters Air Force Space Command, Peterson Air Force Base, Colorado. He was also the director of command, control, communications, and computer systems for U.S. Central Command where he participated in a number of operations, including Southern Watch, Desert Focus, Desert Strike, Desert Thunder, Resolute Response, and ongoing maritime intercept operations in the Arabian Gulf. Raduege has earned the following major awards and decorations: Defense Superior Service Medal with oak leaf cluster, Legion of Merit, Defense Meritorious Service Medal withoak leaf cluster, Meritorious Service Medal with five oak leaf clusters, Joint Service Commendation Medal, and Air Force Achievement Medal. In 1979 he was listed as an Outstanding Young Man in America, and 1992-present “Who s Who in Science and Engineering.” He has served assignments in England, Turkey, Maine, Virginia, Illinois, Colorado, and Washington, D.C.

While at West, Raduege lived with his family on Demorest Rd. and he participated in football and wrestling. He is married to Julee, daughter of Jean R. Hux, and they have three children: Chad (in the Air Force), Rian, and Ashley.

Update: On July 8, 2005 Harry Raduege retired from the US Air Force after 35 years on active duty. At the time he retired, he directed the Defense Information Systems Agency in Washington, D.C. He also served as the manager of the National Communications System and as the Joint Task Force Commander for Global Network Operations for the Department of Defense. July 8, 2005 he was honored by the city of Columbus which proclaimed that day “Harry D. Raduege, Jr. Day.”