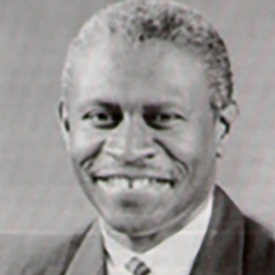 Dr. Lawrence Carter was appointed the first Dean of the Martin Luther King, Jr. International Chapel at Morehouse College in Atlanta, Georgia in 1979, and he is the only person to have held that position.

Born in Dawson, Georgia, his family moved to Columbus when he was a child, and he was raised on the Hilltop. Following graduation from West in 1960, Carter received a B.A. degree from Virginia University, a degree in theology and his Ph.D. from Boston University.

He is a licensed and ordained American Baptist minister, and, in 1994, was a Fulbright Scholar in Brazil. Carter has twice been a National Endowment for the Humanities Fellow, in 1993 and 1996.

Carter is the author of over 40 published articles that have appeared in numerous newspapers and professional magazines. Carter has received 47 honors and proclamations, including Faculty Member of the Year in 1985; Leadership Atlanta 1986; and six times elected delegate to international religious assemblies.

Carter is Sublime Prince, 32nd Degree of the Prince Hall Masons, and is a member of Omega Psi Phi Fraternity, Inc. He is married to Dr. Marva Griffin Carter, who is Assistant Professor of Music, History and Literature at Georgia State University.

The Carters are parents of one son, Lawrence Edward Carter, Jr., a fourteen-year-old, sixth-generation Georgian.

Update: In the Nov. 25, 2018 edition of ‘The Columbus Dispatch,’ columnist Joe Blundo wrote a very nice article about Rev. Carter. It covered his background, mentioned he graduated from West High School, and talked about his latest book – “A Baptist Preacher’s Buddist Teacher.”