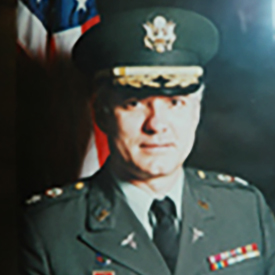 After graduation from West, David W. “Duke” Cockfield attended The Ohio State University for one year before enrolling in the U.S. Naval Academy in Annapolis, Maryland.

Cockfield graduated, with distinction, from Annapolis in 1955 and subsequently commanded two submarines – the USS Nautilus (SNN 571) and the USS Stonewall Jackson (SSBN 634 Blue). He also commanded Submarine Squadron SEVEN in Pearl Harbor, Hawaii, and was then named Rear Admiral in 1982.

From 1982-84 and 1986-87, Cockfield was the Naval Base Commander at Charleston, SC, and he was responsible for area coordination for all naval shore activities and personnel in seven southeast states including a staff of over 94 people and a budget of approximately $1 million. From 1984-87, Cockfield was Commander, Mine Warfare Command, responsible for Mine Countermeasures and Mining for the U.S. Navy. During this time, he was responsible for nearly 300 people and a budget of over $10 million.

Along with personally performing the conceptual design work for the latest class of mine warfare ships, he also represented the U.S. Navy in talks with 25 different NATO, Allied, and non-aligned countries. Rear Admiral David Cockfield retired from the Navy in 1987 and was a consultant to the commercial power plant business. He is married to Dolores Dee Nigri of Brooklyn, NY and resides in Bend, Oregon.